Lower Clapton can be described as having the following approximate boundaries:

Manorial courts from the early 19th century distinguished the parts of Clapton north and south of Lea Bridge Road as Upper and Lower Clapton, and those names soon passed into general use.

Clapton was from 1339 until the 18th century normally rendered as Clopton, meaning the "farm on the hill". The Old English clop - "lump" or "hill" - presumably denoted the high ground which rises from the River Lea. Clapton grew up as a straggling hamlet along the road subsequently known as Lower and Upper Clapton Road, and as the area became urbanised, the extent of the area called Clapton eventually increased to encompass most of the north-eastern quarter of the ancient parish of Hackney.

As described, the settlement emerged along the way which in 1745 was called Hackney Lane, part of which ran through Broad (later Clapton) Common. Building spread to meet streets east of the high road and north of Homerton in the 19th century. Manorial courts (the Manor of Lordship) from the early 19th century distinguished the parts north and south of Lea Bridge Road as Upper and Lower Clapton, and those names soon passed into general use. Hackney Lane came to be known as Lower and Upper Clapton roads, until in the late 19th century the stretch through the common to Stamford Hill was named Clapton Common.[1]

Lower Clapton is centred on Lower Clapton Road, to the north of which is Clapton Pond, the remnant of the old village green.

Clapton Pond and the late-Georgian Clapton Square are the area's two major conservation zones. Clapton Square is an attractive Conservation area which includes historic Georgian terraces facing onto the parkland in the centre of the Square.

Hackney Downs, one of the larger open spaces in Hackney, is formally within this district, though many people consider the Downs to be an area of Hackney in its own right.

Lower Clapton has a relatively large amount of green space for a district of inner London. In addition to Hackney Downs, the area is bordered by Millfields Park, Clapton Park, and Hackney Marshes. 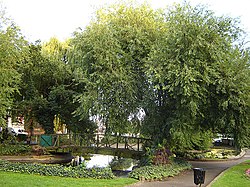 Large parts of Lower Clapton look much as they did when the area was first developed in the second half of the 19th century. Most of the housing stock consists of Victorian terraces of various sizes. Several high-rise constructions erected by the Council in the late 1960s and early 1970s were demolished in the 1990s to make way for low-rise Local Authority housing, e.g. the Clapton Park Estate.

Like many other parts of East London, Lower Clapton is socially diverse and multicultural. Chatsworth Road, which had a regular market until the 1990s, still provides many amenities for people who live in the area. A new Sunday market has been established there since December 2010. The shops and restaurants on Chatsworth Road reflect the diversity of the surrounding streets – offering African, Turkish, Asian and Caribbean produce alongside butchers, bakers and greengrocers. More recent additions include a creperie, coffee shops and a French delicatessen, part of the area's vaunted gentrification in the lead-up to the 2012 Olympic Games.

Secondary schools in the area include Clapton Girls' Academy and Mossbourne Community Academy. Mossbourne is located on the site of the former Hackney Downs School. Millfields Community School is regularly said to be one of the most improved schools in the country and was visited by Tony Blair in 2005 [2]

Clapton F.C. was the original local football team, being formed in 1878. Clapton Orient, founded in 1881 also played in the area before moving to Leyton, Essex in 1937.

Lower Clapton has no railway stations but there are a number close by, including: