Louth is a village at the heart of County Louth. It is roughly seven miles south-west of the town of Dundalk, and the same distance to the neighbouring town of Ardee. The village is about ten miles south-east of Carrickmacross, in County Monaghan. The village gave its name to the county.

The village is named after Lugh, a god of the ancient Irish, and may once have been the site of a shrine dedicated to the god. Historically, the place-name was spelt in variously different ways such as; "Lughmhagh", "Lughmhadh" and "Lughbhadh". The first is thought to mean "Lugh's plain" or "Lugh's field", but the meaning of the other two is unclear. Lú is the modern simplified spelling.

According to tradition, Mochta—a Christian missionary from Britain—founded a monastery at Louth in the 4th century. This is known as St Mochta's House. In the 12th century, Saint Mary's Abbey was built. However, both are now in ruins. The local GAA team took the name St Mochtas and play at Pairc Mochta founded in 1949-2016.

Until early in the 21st century, the village was also home to the last remnants of St John's Abbey. The last standing portion of the walls of the monastery, a 12-foot-high, fout-foot-wide piece known locally as The Pinnacle, suddenly collapsed overnight.

At the heart of the village is the Church of the Immaculate Conception, which was built in 1892, and sits atop a hill overlooking the village and surrounding area. It was destroyed in 2003 by an accidental fire, started during renovation work, leaving only the exterior walls and spire standing, the inferno which had gutted the 110-year-old church. In early 2006, it reopened with a modern-style interior.

The population has increased in the last decade, with a programme of building of new homes in and around the village. In 2002, it had a population of 514, an increase of 28 per cent in six years.[1] 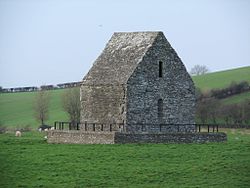 The village was home to former Fianna Fáil politician Eddie Filgate, who served for five years as TD for the Louth constituency. Filgate was first elected at the 1977 general election. He was re-elected twice, at the 1981 and the February 1982 general elections. He did not contest the November 1982 general election. Eddie died on 19 January 2017, aged 101.[2] At the time of his death, he lived next to the site of his childhood house on the outskirts of the village.

The local primary school is called St Mochta's NS and was established in 1973.