Loughlinstown is a village in County Dublin which has become a southern suburb of the conurbation, found on the N11 national road.

St Columcille's Hospital is here, which serves both southern County Dublin and County Wicklow. The European Foundation for the Improvement of Living and Working Conditions, a European Union body, is housed in Loughlinstown House.

Loughlinstown (also 'Loughnanstown' in Early Modern English, is derived from the townland's ancient name, 'Lochan'; the latter is said to have originally encircled a small lake at the meeting of the Carrickmines River and Bride's Glen Stream.

Loughlinstown was inhabited from at least the Neolithic period when the megalithic portal tomb at Cromlech Fields was constructed around 2,500 B.C.

Following Henry II's conquest of Ireland the lands around Loughlinstown were granted to the Anglo-Norman Talbot Family. By 1541 they had been granted to Goodman Family, who held them as "warden of the marches" protecting the southern border of the Pale from raids and incursions of the Wicklow Septs.

Loughlinstown was granted to Sir William Domville, Attorney General for Ireland, in the reign of Charles II and James II. The Domville family held the lands for three centuries until 1962 when they were sold to Sir John Galvin.

In 1975 Loughlinstown House and Commons were the subject to a Compulsory Purchase Order by then Dublin Corporation.

The village of Loughlinstown grew up on commonage land on the Dublin to Bray high road. During the 1960s, one of the earliest stretches of dual carriageway in Ireland was built through the area, leaving the village scattered along the western side of the new road.

For years a large mature chestnut tree was located in the middle of the dual carriageway at its junction with the Wyatville Road. It was known as 'The Big Tree' and was a landmark feature on the road from Dublin to Wicklow. In the 1970s the junction was upgraded and the tree removed. In 2004 the 1960s road was replaced with a new dual carriageway and the junction was replaced with an overbridge.

The Rathdown Union, which was established in 1839, constructed a workhouse on 8 acres of land just south of Loughlinstown village. The institution provided 600 places for the destitute of Dundrum, Blackrock, Stillorgan, Kingstown, Killiney, Glencullen, Rathmichael, Powerscourt, Bray and Delgany. At the height of the Irish Famine the workhouse catered for almost 800 individuals. The institution now houses St. Columcille's Hospital. 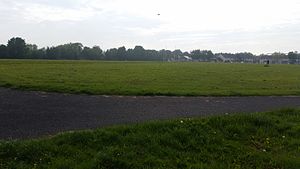