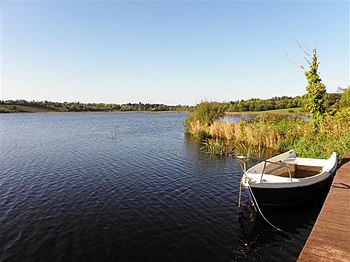 Lough Scur is a freshwater lake of 282 acres in the south of County Leitrim, and one of a scatter of lakes in this part of the county.

The Aghacashlaun River enters the lough at its western end, and south of it the lake is joined by the Ballinamore Canal. a manmade channel which is part of the Shannon–Erne Waterway, here lining a number of Leirtrim’s lakes on its way between the River Shannon and the River Erne. The waters draining from the foot of the lough, at its south-ewestern corner, feed into the canal. Lough Scur is the last lake oin the canal’s route to the Shannon, or the first on the route from it.

There are traces here of settlement here since the New Stone Age. Modern features include quays and moorings.

Protected features are Castle John, three crannogs, and the causeway into Rusheen Island, though "Jail Island" is not protected. The ecology of Lough Scur, and indeed all County Leitrim lakes, is threatened by pollution and invasive species such as curly waterweed, zebra mussel, and freshwater clam.

The name of the lake is from the Irish Loch an Scoir, which has been translated as 'Lake of the horses (or pasturage, or troop)' though there have been many other suggestions.

Fanciful folklore of the 19th century claimed Lough Scur was named from Oscar son of Oisín, and that his grave lay at Aghascur, "the field of the Scur".[1] However, it is pointed out the word "scur" or scuir (the genitive of scor) has various meanings, and so the lake's name could have meant 'lake of the horse-stud'. O’Donovan suggests 'Scuir' means 'lake of the camp', and the Placenames Database of Ireland suggests 'The lake of the horses, pasturage, troop'.[1]

Lough Scur lies about half a mile north-west of Keshcarrigan. It covers an area of 282 acres.[2] It is deep with generally a soft mud or compact peat bottom, the shallowest portion is the northern reach, between Driny and Drumcong, probably due the a large quantity of detritus carried into it by a mountain stream at Annadale.

This is one of a scatter of loughs across this part of County Leitrim, with several others lying by it and linked to it:

Beyond the roscarbon shoal there is an isolated rock almost level with the summer water surface, nearly circular, measuring ten to fifteen feet across.

Sub-glacial Rogen moraine landforms are evident in the valley between Slieve Anierin and Lough Scur, caused by ice age glaciers moving north-east to south-west over millions of years, the Morainic drift heaping up thousands of drumlins in the surrounding lowlands.[5][6]

When surveyed in 2002, no zebra mussels were reported at the highest water level,[12]

Lough Scur forms part of the Shannon–Erne Waterway, lying at the summit of the canal connecting Lough Scur to the River Shannon, just south of Leitrim village. The original canal was constructed in the 1840's, fell into decline as the rail network prospered, but was reopened in 1994 to develop the region’s tourism industry.[13]

The levels of Lough Scur are controlled by Waterways Ireland via two spillways.

Lough Scur contains five or six crannogs (artificial lake dwellings),[14][15] dating formt eh Iron Age or earlier: some have suggested a Neolithic date for some, though they are more typical of the Iron Age. Some Neolithic and Bronze Age artefacts have ben found by the shores of the lake.

Pre-celtic archaeological remains from Lough Scur are preserved by the Royal Irish Academy museum and National Museum of Ireland: 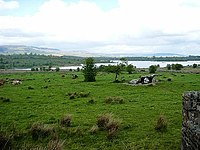 An ancient stone monument, fancifully denominated a ‘druids altar’,[20] is prominently located 400 yards south of the lake in a sloping pasture anciently named Aghascur (‘Field of the Scur).[1] Set against the spectacular backdrop of Lough Scur and Slieve Anierin, it is marked "Dermot and Grania's Bed" on some maps.[21] Two erect stones at the south have been artificially set upright, which suggests a megalithic tomb, but others insist it was rather an attempt to split a rock outcrop from underlying bedrock.[22] There is also a cist located here.

In 1265AD, Aedh mac Felim Ó Conchobair constructed a fortified "castle" at Loch Scur.[23] Defending the Conmhaícne of Muintir Eolais from Norman conquest was a military objective, and in 1270 his Lough Scur regiment and Conmhaicne forces both participated in the decisive Battle of Áth an Chip.

Crannogs were used in Lough Scur through the Middle Ages,[24] and the Irish Annals allude to a fortified crannog at Lough Scur.

In the 19th century, a portion of a heavy oak-frame, with mortices and cheeks cut into it, was found on a crannog here.[17][27]

In 1570 John (‘Sean’) Reynolds built a fort at Gowly townland on a peninsula called Castle Island.[28] Castle John was three stories high and surrounded by good rock land. Between 1570 and 1729, Castle John was residence to Sean Reynolds (d. 1619), Humphrey his son (d. 1661), Sean his grandson (captured and probably executed during the Irish Rebellion of 1641) and another grandson James (d. 1729), who probably abandoned the Castle during his lifetime. The dilapidated ruins remain today, but are not preserved as national monument, tourist, or heritage site. Some of the building collapsed aroud 1908, but was repaired by a heritage preservation society.[29]

On 6 April 1605, Sean Reynolds and his son Humphrey were appointed gaoler of County Leitrim. They constructed a 'prison' on the lake island now known as 'Jail island' in Lough Scur. The gaol cells were small with holes about six inches in diameter for air.[29]

Tradition recalls many people being hanged on the island,[30] and that Sean was killed by a soldier from Longford avenging his sister's death there.[30][31] Prison Island was abandoned once Carrick on Shannon gaol became established. Dilapidated ruins of the prison remain but are not preserved for heritage.

In the early 20th century, a book or manuscript titled the “Book of Lough Scur", on the Reynolds family (ancient name MacRannal or Magrannal), supposedly existed in the library of an unidentified deceased person near Keshcarrigan, co. Leitrim.[32]