Leitrim is a village in County Leitrim; the place from which the county received its name.

Leitrim stands on the bank of the River Shannon, at the junction of the R280 and R284 regional roads and is connected to the River Erne by way of the Shannon-Erne Waterway.

This is a well kept village and is well situated as a base from which to explore the upper Shannon and County Leitrim. Leitrim village is promoted too as the gateway to the Shannon-Erne Waterway and boasts a jetty with excellent facilities for the cruising traffic which passes through. The village is just over three miles from Carrick-on-Shannon and 97 miles from Dublin.

The village lends its name to County Leitrim.

Leitrim village was an O'Rourke stronghold in the Middle Ages and was a place of some strategic importance as the river nearby is comparatively shallow and narrow and therefore easily forded.

1540: The castle of Leitrim was erected by O'Rourke (Brian, the son of Owen) while a great war waged against him on every side, namely, in Moylurg, Muintir-Eolais, and Breifney-O'Rourke; and his own son and a party of the men of Breifney were also at war with him.

O'Rourke finished the castle in a short time, and destroyed a great portion of Moylurg on his way to Drumshanbo in 1569. 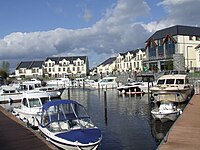 Successive Finance Acts during the 1990s encouraged the building of hotels and holiday houses in designated deprived rural areas, and this village was a large beneficiary of these tax incentives. The resultant explosive growth in the period between 2002 and 2007 saw several large complexes of self-catering apartment blocks' being erected around the marina, which was itself funded by the International Fund for Ireland under the auspices of the Anglo-Irish Agreement.