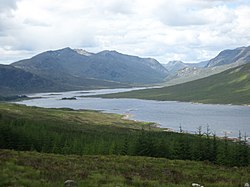 The first proper road across the Loyne was begun in 1821 by the engineer Thomas Telford as part of the later stage of military road building.[2] The road connected Tomdoun and Inchlaggan near the River Garry with the road and inn at Loch Cluanie to the north. The road ran across the Loyne over a stone arch bridge. Much of the original road survives either side of the loch, although the bridge across the river along with a segment of the road was flooded with the building of the dam. Occasionally the bridge has been visible when water levels are low in the loch.[3]

Prior to the 1950s, the loch was originally much smaller being fed only by the naturally occurring River Loyne.[4] However, as part of a wider Hydroelectric scheme, a dam was constructed in 1956 and completed in 1957 that increased the water level and flooded the original road built by Thomas Telford.[1][4] A newer road, the current A87 was built higher up. The loch is visible to traffic on the road above. Water proceeds north from the dam via a tunnel into Loch Cluanie.[1]