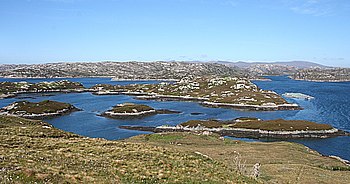 Loch Laxford is a ragged sea loch scarring deep into the coastline of north-western Sutherland, lines with rocky islands and promontories.

At its head, in the barely inhabited area known as Laxford, the loch is fed by the River Laxford, the mouth of which forms a bay, Laxford Bay, as an inlet of the loch. The loch, like the river, extends in a south-east to north-west direction, as both lie in a scar which crosses Sutherland in that direction at a geological shear.

Loch Laxford marks the boundary in the ‘Lewisian Gneiss Complex’ between a region to the south, containing Scourian high grade metamorphic rocks with undeformed Scourie dykes, and a region from here northwards of lower metamorphic grade and rocks of different appearance, deformed and metamorphosed during the Laxfordian episode: this boundary is known by many geologists as the "Laxford Front".[1]

The name of the loch, the parish and the river is from the Old Norse Lax fjord, meaning 'Salmon inlet'.

The loch is a Special Area of Conservation, classified as a large shallow inlet and bay. It has a wide variety of marine habitats and species. Water conditions are mostly sheltered because of the reefs and islands but the outer region of the loch is very exposed. It has the most extensive shoreline of sheltered sediment in Sutherland.[2] There are many small islands in the loch.