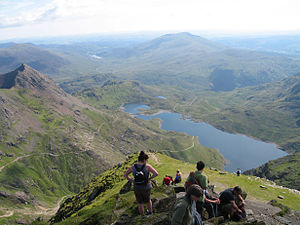 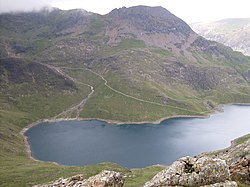 Crib Goch over the lake

Llyn Llydaw is a lake on the flanks of Snowdon in Caernarfonshire, a long thin lake lying in the bottom of the huge corrie on the east side of the mountain around which Snowdon and its neighbouring peaks sweep. It is overlooked by Snowdon itself, by Garnedd Ugain and Crib Goch to the north, and by Y Lliwedd to the south. One of the major paths up Snowdon begins along the lake.

Llyn Llydaw is the largest of the three lakes on Snowdon's eastern flank. Higher up lies Glaslyn, and lower down lies Llyn Teyrn.

The name of the lake is Welsh. It means "Brittany lake", though whether this is the derivation one cannot say for sure.

Snowdon is the highest mountain in the British Isles outside the Highlands, reaching 3,650 feet, and Llyn Llydaw is about one-third of the way up to this height, its surface at 1,430 feet feet above sea level.

This is one of the most visited lakes in the United Kingdom. Thousands of people every year visit Snowdon and many walk past this lake on the Miners' Track or above it on the Pyg Track.

The Miners' Track crosses the lake itself; at its eastern end; once this was by a narrow causeway built in 1853 but in recent years a more solid causeway has been built, which somewhat spoils the fun.

The Miners' Track and Pyg Track both begin at Pen-y-Pass at the head of the Pass of Llanberis and climb up from there. The Pyg Track takes the immediately higher route along the slope of Crib Goch, while the Miners' Track goes south to skirt Llyn Teyrn then to Llyn Llydaw. After crossing the lake, the track follows its north shore before climbing to Glaslyn then up the steep slope to Snowdon's summit.

The lake featured in Robson Green's Wild Swimming Adventure (ITV December 2009), chosen because it is allegedly the coldest lake in Britain. Green's website[1] states that the water was 7 degrees Celsius, but other Welsh lakes are often colder than this. 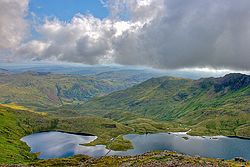