Llanwnda is a rural village and ancient parish in northern Pembrokeshire. It lies some two miles northwest of the port of Fishguard and is inside the boundaries of the Pembrokeshire Coast National Park.

To the north of the village is the rocky outcrop of Garnwnda, which was the site of a French soldiers' camp during the Battle of Fishguard. On the north side of Garnwnda is a prominent cromlech excavated by John Fenton in 1847.[1]

The community came to a degree of national prominence in the summer of 2007 following the purchase of a semi-derelict farmhouse (Trehilyn) by the broadcaster Griff Rhys Jones and the ensuing BBC television documentary, A Pembrokeshire Farmhouse, which recorded its restoration. 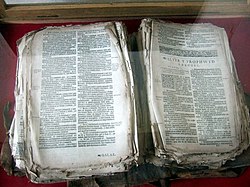 This tattered Welsh Bible of 1620, in Llanwnda church, is said to have been rescued from the hands of French invaders in 1797.[3]

This Pembrokeshire article is a stub: help to improve Wikishire by building it up.
Retrieved from "https://wikishire.co.uk/w/index.php?title=Llanwnda,_Pembrokeshire&oldid=57779"
Categories: