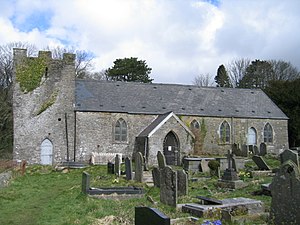 The parish encompasses Gwaun-Cae-Gurwen, Pontardawe, Ystalyfera and Lower Brynamman. The parish church is dedicated to St Ciwg and is a Grade-I-listed building. Part of the tower is Norman, dating back to the 13th century, with the aisle dating back to the 16th century. It is situated on Llanguicke Road to the south of the parish. It was closed and it was put up for sale in 2004. It was purchased by the Friends of Llangiwg in 2007, a voluntary organisation comprising members of the local community.

This Glamorgan article is a stub: help to improve Wikishire by building it up.
Retrieved from "https://wikishire.co.uk/w/index.php?title=Llangiwg&oldid=43401"
Categories: