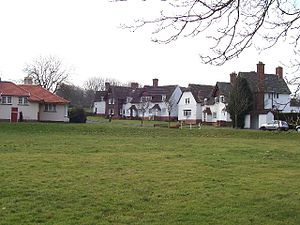 Llandarcy is a village near Neath in Glamorgan, and the site of the UK's first oil refinery. The village, which lies near the Junction 43 of the M4 motorway, was originally designed as a garden village to house the workers for the refinery, built by British Petroleum between 1918-22.[1] 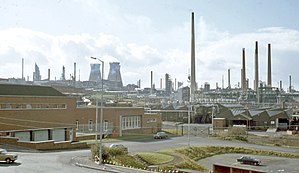 The former Llandarcy Oil Refinery in 1973

Llandarcy was chosen as a site for a refinery because of its proximity to Swansea docks, where crude oil could be transported by sea from the Middle East. The site was damaged by Luftwaffe bombing in 1940.[2] At its peak the refinery was a major employer in South West Wales, with over 2,600 workers.[3] However, it was also responsible for industrial pollution at nearby Crymlyn Bog, an area designated as a Site of Special Scientific Interest.[4] Operations at the refinery were gradually scaled back in the late 20th century, and the site closed in 1998.[5]

The village, named after William Knox D'Arcy (founding director of the Anglo-Persian Oil Company, forerunner of BP) consisting of exactly 100 houses and flats each property was designed to be different, they are all of stone construction with a community centre and local shop. The village is a conservation area as its construction followed the lines of the Cadbury village.

BP, the company operating the refinery, also operated a sports and leisure club. Following the closure of the refinery, the leisure facilities were acquired by Llandarcy Park Ltd, which redeveloped the site with a new health and fitness club, hotel and restaurant.[6] Llandarcy now hosts the Virgin Active Health & Racquets Club (formerly known as the Glamorgan Health & Racquets Club), which has a range of indoor and outdoor sports facilities,[7] and the Llandarcy Academy of Sport, which has one of only two indoor grass training fields in Wales.[8]

The disused land from the scaling down of the oil refinery has found a number of new uses. Part of the site is now occupied by offices of the Environment Agency. Land near the entrance of the old refinery near M4 Junction 43 has been redeveloped as a business park.[9] All of the remaining brownfield land which was occupied by the refinery is being re-developed into a new village called Coed Darcy. The Prince's Trust is an interested party in this development, which seeks to develop the site as an "Urban Village" in the same vein as the Poundbury village project.[10]