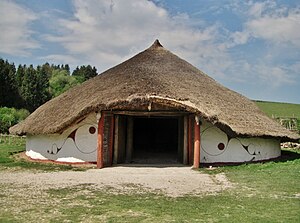 Little Woodbury is the name of an important Iron Age archaeological site near the city of Salisbury in Wiltshire.

The site lies about a mile and a quarter south of the centre of Salisbury and one mile north of Odstock village. It was partially excavated between 1938 and 1939 by Gerhard Bersu, a German archaeologist who had been driven to Britain following persecution by the Nazis. In excavations like Little Woodbury he introduced the revolutionary approaches in the excavation of settlements (for example the identification of timber post remains) developed in continental Europe during previous decades.

A settlement had been identified at the site through aerial archaeology by O.G.S. Crawford almost twenty years previously. He had seen a circular enclosure as a cropmark, and it was identified for further excavation as a possible source of information on everyday prehistoric Britain. Bersu was commissioned by the Prehistoric Society to excavate the site in order to improve knowledge of early British settlement sites, which were until then poorly understood.

Bersu dug a network of parallel trenches, one after the other, across the site. By this method he was able to identify a large roundhouse and several other domestic features. The postholes of the roundhouse enabled Bersu to argue that these structures were the common domestic building type of the Iron Age; prior to his work it was thought that people lived in holes in the ground. Through Bersu's identification of animal bone and cereal grains, he convinced other archaeologists to re-evaluate the large holes they had found as storage pits.

When war broke out in 1939, work stopped and Bersu was interned as an enemy alien on the Isle of Man. He never returned to the site and post-excavation work was never fully completed. The results from Little Woodbury however served to influence generations of archaeologists to take an interest in the day-to-day life of ancient peoples and the roundhouse has become a regular feature in interpreting prehistoric sites.