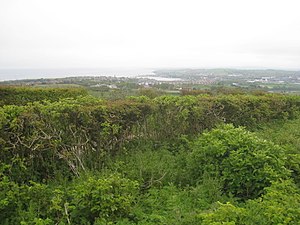 Berwick from the Camhill Viewpoint in the Liberties

The Liberties of Berwick constitute that area of land north of the River Tweed which was in former days governed as appurtenant to the Borough of Berwick-upon-Tweed. This land, the town and the Liberties, is now the northernmost portion of Northumberland, and the only part of the county lying to the north of the Tweed.

The origin of the Liberties is in the mediæval wars that rent the island: by the Treaty of Perth the border of England with Scotland was set at the River Tweed, and on its north bank the Burgh of Berwick-upon-Tweed was a prospering port of Scotland. In war though, Berwick was frequently taken by the English and retaken by the Scots until in 1482 Richard, Duke of Gloucester (later Richard III) recaptured the town for the last time. The land annexed to the English crown stretching beyond the walls of Berwick itself formed the Liberties of Berwick.

Lord Mansfield noted in 1774 that "Berwick, after the conquest of it, was governed by charters from the Crown without the interposition of Parliament, till the reign of Jac. 1st".[1] King James I & VI had granted the borough a new charter and thereafter it appears that the town with its Liberties was accepted to be part of England and Northumberland.

The Liberties lie outside any of the six Wards of Northumberland, but are included geographically with Glendale Ward.

The Liberties extend as far north as to a place between Marshall Meadows Bay (Northumberland) and Lamberton (Berwickshire), and westward up the Tweed to a mile above where the Whiteadder Water joins the Tweed.

The Liberties, including Berwick, cover about nine and a half square miles. The only place of any size here is Berwick itself. A notable historical site outside the town is Halidon Hill, the scene of the eponymous battle in 1333 at which King Edward III defeated Archibald Douglas, Regent of Scotland, allowing Edward's forces to take Berwick.

The present Bounds were defined in the truce of 1483, a year after Richard of Gloucester had taken the town,[2] in the reigns of Richard III of England and James III of Scotland: commissioners were appointed jointly to ascertain the limits of Berwick, and it was agreed the ground in dispute should remain uncultivated, unbuilt, and uninhabited.[3]

The Parish of Holy Trinity and St Mary is the most northerly parish in the Church of England and part of the Diocese of Newcastle. Its boundary is co-terminus with that of the Liberties of Berwick. These Bounds of which have been ridden on horseback on May Day of each year for several hundred years.[4]

The county or liberty of Berwick, forms nearly an equilateral triangle, whose sides are each about two miles in length, extending northward from the harbour's entrance to Lamberton grounds, and thence in a south-westerly direction to the Tweed, which forms the southern limit, whilst the sea and Berwickshire in Scotland, constitute respectively the northern and western boundaries. .... The parish of Berwick-upon-Tweed, comprises an area of 6,195 statute acres; its population in 1801, was 7,187; in 1811, 7,746; in 1821, 8,723; in 1831, 8,920; in 1841, 8,484; and in 1851, 10,294 souls. At the last mentioned period there were 1,384 inhabited houses, fifty-four uninhabited houses, and thirteen in the process of erection
—History, Topography, and Directory of Northumberland, Whellan, 1855

THE form of the parish of Berwick approaches nearly to an equilateral triangle, two sides of which being fully three miles each, and the other side some what more. One side of the triangle extends from the entrance to the harbour northwards, terminating at the grounds of Lamberton; a second runs from thence west by south, and pasting the houses of Mordington and Edrington, and afterwards crossing the river Whitadder, terminates at the Tweed, a little way above Gainslaw-house; the remaining third side goes down close by the river all the way to its termination at the Bar. In the east, these liberties are bounded by the German Ocean to the north-west; and south-west, by the lands of Lamberton, Mordington, Edrington, and Paxton, all lying in the county of Berwick; and in the south by