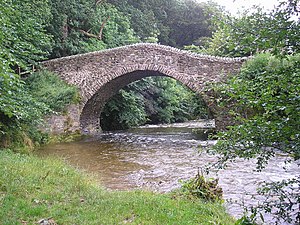 Pack Bridge over the Leithen Water to Pirn Wood

The Leithen Water is a tributary of the River Tweed in Peeblesshire. Its name is thought to be form the ancient Cumbric British language, meaning grey in colour.

The river rises in the Moorfoot Hills and flows down to join the Tweed near the town of Innerleithen, whose name comes from the monastic cell set up here by Irish monks and named 'Mouth of the Leithen' in their language.

In the summertime, the Leithen Water is a local favourite for the children who wade, 'guddle' fish (catch fish with hands) and play about in it. In the summer months, local children build small dams to deepen it, especially at the Cauld (a fish ladder near Inerleithen Golf Course) and at Leithen Bridge. The latter is an old stone bridge, erected in 1799 using funds from a stipend, to enable easy access for townsfolk to attend church on the west side of the Leithen Water.

The Leithen Water is usually cool and clear, however post heavy rain it can become quite murky. In Innerleithen, the river is about 20 to 25 feet across and is not deep enough to swim.

The river lends its name to the character Sir Edward Leithen, who appears in a number of novels by John Buchan.