Leinster House, the grandest manion in the heart of Dublin, is a Georgian town residence built for the Dukes of Leinster and which is now the seat of the Oireachtas, the parliament of the Republic of Ireland. The term 'Leinster House' has become a metonym for Irish political activities, as 'Westminster' is for those of the United Kingdom.

The house was built from 1745 for James FitzGerald, Earl of Kildare, who was later elevated to the title Duke of Leinster. It served as his family seat in Dublin until 1815, when the 3rd Duke sold the house to the Dublin Society. Since 1922, it has housed the Irish parliament, and the original ducal palace is now the core of a complex of buildings housing 'Oireachtas Éireann', its members and staff, all known as Leinster House. The original house is most recognisable part of the complex, and the "public face" of Leinster House.

For the duration of the Social Season and parliamentary sessions, the Earl of Kildare and his family resided in state in a Dublin. Ireland's parliament over the centuries had met in a number of locations, but settled at College Green, next to Trinity College, and it was close to this location that James FitzGerald, Earl of Kildare built his new town house, known as Kildare House. It was built from 1745-1748, designed by Richard Cassels, an acclaimed architect. The new house was located on the unfashionable and isolated south side of the city, far from the main locations of aristocratic residences, namely Rutland Square (now Parnell Square) and Mountjoy Square. The Earl predicted that others would follow; in succeeding decades Merrion Square and Fitzwilliam Square became the primary location of residences of the aristocracy, with many of their northside residences being sold (many subsequently deteriorating and ending up as slums). 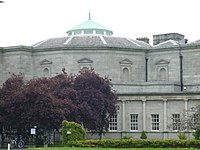 In the history of aristocratic residences in Dublin, no other mansion matched Kildare House for its sheer size or status. When the Earl was made the first Duke of Leinster in 1766, the family's Dublin residence was renamed Leinster House.[1]

One famous member of the family who occasionally resided in Leinster House was Lord Edward FitzGerald, who became involved with Irish nationalism during the 1798 Rebellion, which cost him his life.

With the passage of the Act of Union in 1800, Ireland ceased to have its own parliament. Without a House of Lords to attend, increasing numbers of aristocrats stopped coming to Dublin, selling off their Dublin residences, in many cases to buy residences in London, where the new united parliament met.[2]

One of the scholars of the Dublin Sociey, before it moved into Leinster House, was James Hoban, who later went to the infant United States and designed the presidential mansion required for Washington DC; the White House, the design for which was based on the first and second floors of Leinster House. Hoban also designed the Charleston County Courthouse in South Carolina, in the same style, and even more similar to Leinster House.

The Royal Dublin Society was a most active institution in the promotion of agricultural practice, amongst other concerns, and its Dublin Spring Show and Dublin Horse Show were held on its Leinster Lawn, facing Merrion Square.

In 1853 the Great Industrial Exhibition was hosted in the grounds of Leinster House.[3]

At the end of the nineteenth century, two new wings were added, to house the National Library of Ireland and the National Museum of Ireland. The Natural History Museum was built on the site. Part of this scheme intended to re-clad the house in more attractive Portland stone and extend the portico outwards (as opposed to being attached). This was not undertaken.

The Anglo-Irish Treaty of 1921 provided for the creation in most of Ireland of a self-governing dominion; the Irish Free State. As plans were made to bring the new state into being, the Provisional Government under W. T. Cosgrave sought a temporary venue for the meetings of the new Chamber of Deputies Dáil Éireann and Senate Seanad Éireann. Plans were made to turn Royal Hospital Kilmainham, an eighteenth-century former soldiers' home in extensive parklands, into a full-time Parliament House. However, as it was still under the control of the British Army, who had yet to withdraw from it, and the new Governor-General of the Irish Free State was due to deliver the Speech from the Throne opening parliament within weeks, it was decided to hire the main Royal Dublin Society Lecture Theatre attached to Leinster House for use in December 1922 as a temporary Dáil chamber. The building was bought outright from the Society in 1924.[1]

In 1924, due to financial constraints, plans to turn the Royal Hospital into a parliament house were abandoned; Leinster House instead was bought, pending the provision of a proper parliament house at some stage in the future. A new Senate or Seanad chamber was created in the Duke's old ballroom, while wings from the neighbouring Royal College of Science were taken over as used as Government Buildings. The entire Royal College of Science, which by then had been merged with University College Dublin, was subsequently taken over in 1990 and turned into a state of the art Government Buildings. Both the National Library and National Museum wings next to Leinster House remain used by as a library and museum and are not attached to the parliamentary complex. While plans were often made to provide a brand-new parliament house (sites considered included the Phoenix Park and the Custom House), the Oireachtas has remained permanently located in Leinster House.

Since then, a number of extensions have been added, most recently in 2000, to provide adequate office space for 166 TDs, 60 senators, members of the press and other staff. 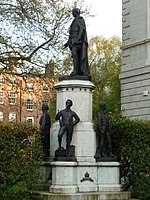 The statue of Prince Albert

A number of monuments stand, or have stood, around Leinster House. Its Kildare Street frontage used to be dominated by Queen Victoria, a large seated bronze statue by John Hughes, first unveiled by King Edward VII in 1908. The Irish Free State's having become a republic, the Queen's statue overlooking the Irish parliament was relocated to the Royal Hospital Kilmainham in 1947.[4] It was re-erected in 1987 in front of the Queen Victoria Building in Sydney, Australia. Facing the garden front on its Merrion Square side, stands a large triangular monument commemorating three founding figures of Irish independence, President of Dáil Éireann Arthur Griffith, who died in 1922, Michael Collins and Kevin O'Higgins, the Chairman of the Provisional Government and the Vice-President of the Executive Council (deputy prime minister), both of whom were assassinated, in 1922 and 1927 respectively. Another statue commemorates Prince Albert, husband of Queen Victoria, who held his major Irish Exhibition on Leinster Lawn in the 1850s.

The main building has undergone regular extensions from Victorian times, through to a major extension to create offices for TDs in the 1960s, to most recently the building of Leinster House 2000, a new block of offices built to the north of the original ducal palace.

The main extensions are:

Though the Kildare Street side car park was restored for use quickly, a considerable increase in staff numbers and media numbers working in the Leinster House required that the temporary car park on Leinster Lawn remain in use. Plans to replace parking at both sides of Leinster House with an underground car park fell through. Despite this the lawn on the Leinster House side has been reinstated, though not to the same specifications as the original which has led to some anger from conservationists.