From Wikishire
(Redirected from Kirkpatrick Juxta)
Jump to: navigation, search 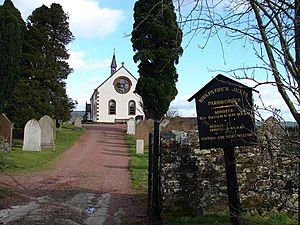 Kirkpatrick-Juxta is a parish of upper Annandale in Dumfriesshire, containing the village of Beattock. The very north-west of the parish extends into Lanarkshire in the vicinity of Whiteholm farm. In 2011 the population was 837.

It takes the suffix Juxta on account of its being nearer to Edinburgh than any of the other Kirkpatricks. It is bounded to the north and east by Moffat; to the south-east by Wamphray; to the south by Johnstone and Kirkmichael; to the south-west by Closeburn, and to the west and north-west by Crawford in Lanarkshire. The A74(M) motorway, A701 road and West Coast Main Line pass through the flatter part of the parish to the east. To the west, the parish enters the Lowther Hills, the highest of which is Earncraig Hill at 2,004 feet at the meeting point of Closeburn and Crawford with Kirkpatrick-Juxta. There was formerly a station at Beattock from 1847 until 1972 when it was closed as part of the electrification works to the line.