Not to be confused with Kingswood, Cotswolds

Kingswood is a town in the very south of Gloucestershire, swollen with urban development as a result of its proximity of the City of Bristol, which is immediately to the west. It has grown so that Kingswood and Bristol are now thoroughly contiguous, although Kingswood has escaped being placed within its neighbour’s civic area.

The A420 road, which connects Bristol and Chippenham, runs through Kingswood and forms the High Street. The A4174 'Avon Ring Road' also runs around the eastern edge of Kingswood. Bath is 12½ miles away.

In the 18th century Kingswood was a small coal mining village where George Whitefield's open-air preaching greatly influenced John Wesley in the founding of Methodism. The construction of a number of chapels, Whitefield's Tabernacle and schools by Whitefield, Wesley, and their associates and followers is held to be one of the factors contributing to Kingswood's growth.

In Saxon and Norman times, Kingswood Forest was a royal hunting estate which surrounded Bristol, extending as far as Filwood in South Bristol. "From early days the Constable of Bristol Castle, the king's officer in the area, was also the Chief Ranger of the Kingswood Forest and the first of these recorded is Ella who died in 920. At the edge of the forest, to the north of the River Froom, lay the little hamlet of Stapleton, the name of which is Saxon in origin, being held to mean 'The farm, homestead or croft – by or near the Stapol, post or pillar'".[1]

The Kingswood area first came into industrial prominence in the late 17th century, because of coal mining. Typical of these were coal fields in the Easton and Coalpit Heath/Yate areas.[2] The coal mining history still affects the town with gardens occasionally opening up. The local MP has petitioned in Parliament for full surveys of the coal mines under the town.

Budgetts started in Kingswood around 1800 as a grocery shop. Around 1820 Samuel Budgett became a partner and the name became H.H. & S. Budgett. He turned the shop into a grocery wholesaler with a rapidly expanding sales area. This provided a source of good jobs in the area. Also Samuel and his elder brother Henry were strong Methodists and they supported all Christian denominations in the area. In 1842 there was a major fire in the warehouse and the business moved to central Bristol. Samuel developed a farm and continued to live in the area until he died in 1851.

In the early period Kingswood boot factories tended to be small, family-run units relying heavily on outwork, for example the Pow family (Pow's Road). The various parts of the boots were collected by the outworkers from the factory and made up at home, the boots being returned to the factory to be 'finished'. This type of production which was later superseded by larger, more mechanised factories better geared to mass production, such as GB Britton on Lodge Road (now closed).

Douglas started out making drain-covers and lamp-posts but in 1907, thanks to Bedminster designer Joseph Barter, the company fitted a unique horizontal twin-cylinder engine on to a standard cycle frame. It was the start of a legend.

During World War I, the works was taken over by the government and turned out 300 motorcycles a week for the Army. When the war ended it was appointed motorcycle maker to King George V. It is doubtful whether the stout monarch ever ventured out on a Duggie but his two sons, the Duke of Gloucester and the Duke of York (later George VI) certainly did.

The first model was a bit primitive but by 1910, Douglas had started racing. In 1912, Douglas machines took the Isle of Man TT and Grand Prix of France titles and the company’s 20-year domination of the sport had begun. By 1923, Douglas machines held 150 British and world records.

For many years Kingswood was the focus of an annual temperance parade featuring musical bands and 'floats' with local children and church groups on board. The parades attracted crowds numbered in the thousands and were hugely popular. With the demise of the temperance league participants dramatically reduced. The parades, which were always held on Whit Monday, were supplemented by evening fireworks in the early 1990s and re-branded as the Kingswood Festival. At one festival the pop band Worlds Apart performed. The Whit Monday parades have now stopped.

Kingswood RFC Old Boys was founded in 1954/55 by a group of pupils from Kingswood Grammar School (Later renamed Kingsfield School and then Kings Oak Academy). The Old Boys played their first game at the start of the 1954/55 season against Old Elizabethans. Within 10 years, a 2nd XV had evolved and the club, originally a “closed shop" to new-comers, was allowing some outsiders to join. A 3rd XV was formed in the late 60's by which time membership was open to all. In 1979/80, Kingswood RFC built their own clubhouse and spent the next 16 seasons at the Church Avenue ground in Warmley. In 1996, the club moved to their present location - Grimsbury Road Playing Fields. In 2014, Kingswood RFC were awarded The Bristol Post's Community Club of the Year award for its services to increasing levels of participation in junior players. 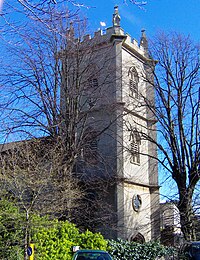