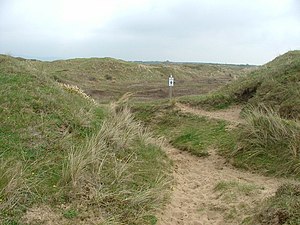 Kenfig is a village and ancient borough in Glamorgan. It is situated a mile inland on the north bank of the Bristol Channel, and just south-west of the M4 motorway. To the east is the town of Bridgend, at approximately six miles.

The area of sand dunes and the pool at Kenfig are managed as Kenfig Pool National Nature Reserve, the area designated a Site of Special Scientific Interest. The reserve has a visitor and interpretation centre, and a car park. The dunes are home to a variety of rare and endangered species of plants and animals, including a high concentration of fen orchid (or Liparis loeselii). It makes up part of the largest active sand dune system in Europe. The current village, built further inland, is a continuation of the mediaeval one. Landmarks include ruins of Kenfig Castle, and a natural pool which attracts birdwatchers. It is one of the few places in Britain where the bittern can be seen during the winter.

The original Bronze Age settlement was situated around Kenfig Castle, but the encroaching sand became difficult for inhabitants around the 13th century, at which time the village was relocated further inland, forming the current village of Kenfig and Marlas. The church was moved from the original village stone by stone and currently stands in the village of Pyle, where the relocation is evident by smaller stones at the bottom of the church, with larger ones above. All that remains now of Kenfig Castle is covered by the sand dunes, except for the top of its 50-foot keep which was uncovered in the early 20th century. The earlier settlement was the subject of an episode of the archaeological television programme Time Team]', screened on 18 March 2012.

The borough contributed with other Glamorgan towns to sending a member of parliament to until the Reform Act of 1832. The municipal ceremonial mace is in the National Museum of Wales but a pewter copy is held in a public house.

In 1968 BorgWarner opened a plant at Kenfig for the manufacture of automatic transmissions.[1] In January 1976 the plant completed its two millionth gearbox, which was 'presented' to A B Volvo.[1] At that time a press release stated that Borg-Warner's UK plants at Letchworth and at Kenfig were producing transmissions for use in more than fifty different car models, and that more than half the gearboxes produced were exported outside the UK.[1] In 2001 the factory faced the threat of closure but was saved by a new contract from Korean car company Kia. In December 2008 Borg-Warner announced that the plant would finally close by mid-2010 with the loss of all 110 jobs at the site; a statement from the company blamed the economic downturn for the decision.[2]