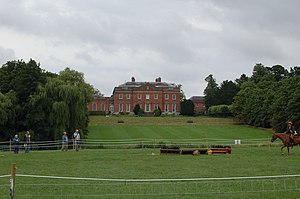 The present Palladian hall was built in 1732 for William Hanbury, a famous antiquarian, by Francis Smith of Warwick, to a James Gibbs design; the hall is still today surrounded by its working estate, and comprises both parkland and gardens. Pevsner described the building as, “a perfect, extremely reticent design…done in an impeccable taste."

Hanbury in building the hall was utilising a fortune which had been bolstered by an advantageous marriage to a niece of Viscount Bateman; he went on to acquire the Shobdon estate in Herefordshire and one of his grandchildren William Hanbury (III) succeeded to a Bateman baronetcy.

Richard Christopher Naylor, a Liverpool banker, cotton trader and horse racing enthusiast purchased the estate in 1864 mainly for its hunting potential. In 1902 George Granville Lancaster bought the estate; his son, Claude, inherited on his majority in 1924, and later passed to Claude's elder sister Cicely in 1967; she later established the Kelmarsh Trust to safeguard the estate's future after her death in 1996.

Ronald Tree and his wife Nancy Lancaster took a 60-year repairing lease on the Hall in 1929 on the Hall. Tree became the Member of Parliament for Harborough in 1933. His wife, who became renowned for her work and taste in interior design, subsequently married the owner of the Place, Colonel Lancaster.