Kelly Bray is a village in eastern Cornwall, a mile north of Callington and in that village’s civil parish. It stands immediately east of Kit Hill. The village is in a former mining area, the remains of which litter the landscape.

Kelly Bray is first recorded around 1286 as Kellibregh from the Cornish Kellybregh meaning "dappled grove".[1]

Kelly Bray was formerly the venue for the Royal Cornwall Show until it was moved to Wadebridge. The village was the location of Callington railway station - terminus of a branch line to Plymouth via Gunnislake. The line was closed beyond Gunnislake in 1966. 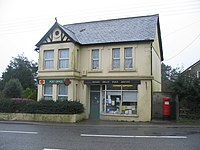 Before the industrialisation in the 19th century agriculture was the main activity in the land surrounding Kelly Bray.

During the 1820s and 1830s a significant capital investment enabled the development of tin copper and lead mines in the area. In 1843 the mine at Kelly Bray amalgamated with the neighbouring mines of Holmbush and Redmoor to form the Callington Mining Company employing a workforce of over 250 hands. The mining activity around Kelly Bray continued until 1946.[2]

In the present day various light industrial businesses are situated in the Florence Road Business Park area of the village.