Hurst Green is a large village in Surrey adjacent to and merging with Oxted. The Greenwich Meridian passes through Hurst Green.

Close by are Oxted to the north and the village of Merle Common to the south. To the east and west are heavily wooded areas, also to the west the small village of Broadham Green with the Haycutter pub.

Hurst Green was very small until the opening of Hurst Green Halt in the early 1900s. After this more houses rapidly began to be built, with a new council estate in the 1940s/50s. To cater for the increase in population, Hurst Green Infant School was opened in the late 1950s and Holland Junior School in 1971. The Halt was rebuilt as Hurst Green railway station in 1961 with frequent commuter services to London Bridge and Victoria.

Just south of Hurst Green is the village of Holland. This is smaller than Hurst Green and is mainly residential with a small industrial estate (International Rectifier). In 2007 the disused Ajax factory on the estate was destroyed by arson and has now been developed into a nursing home. Holland and Hurst Green are now recognised as one, as there is no clear divide between the two. 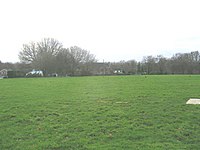