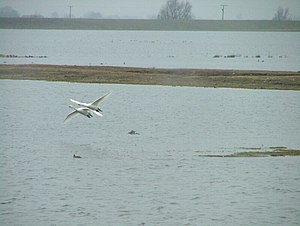 The Washes at Welney 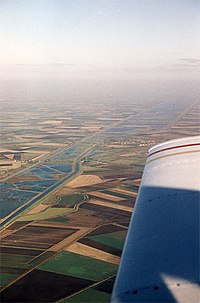 The Washes from the air

The Hundred Foot Washes or the Ouse Washes are the area between the Old Bedford River and the New Bedford River (also known as the Forty Foot Drain); twin diversion channels of the River Great Ouse, running straight and parallel from Earith to Denver. The Washes are a long, thin area in the Great Fen in Huntingdonshire, Cambridgeshire and Norfolk, principally intended for drainage but now known for waterfowl and protected in that capacity.

The Washes take the name "Hundred Foot Washes" from alternative name of the Old Bedford River, the "Hundred Foot Drain" (because of its breadth), and the Ouse Washes from the Great Ouse, whose floodwaters are taken off here.

The Washes are part of the fenland, drained by the twin rivers and unnumerable drainage channel, but they lie below the level of the rivers and below seal level, and in the wintertime they frequently flood, creating a vast sheet of water submerging the Old and New Bedford Rivers and indeed much of the landscape around them, creating perhaps a memory of what the fens would once have been like all year.

In 1630, King Charles I granted a drainage charter to the John Russell, 4th Duke of Bedford, who engaged the Dutch engineer Cornelius Vermuyden to construct the two Bedford rivers. The purpose of the new rivers was to facilitate drainage of the Great Ouse between Earith and Downham Market. The area between the rivers is 20 miles long and almost a mile wide and acts as washland, which is to say a floodplain during the winter and, increasingly, also in summer. When they are flooded this causes a 30-mile detour for local residents.

The Washes are now of international importance and are designated a Special Protection Area for their wildfowl; there are nature reserves at WWT Welney and RSPB Ouse Washes. The washes are the largest area of frequently flooded (for an average of 22 days a year) grazing marsh in Britain. It is a Ramsar site, a Special Protection Area (SPA) and a Special Area of Conservation (SAC), as well as the Ouse Washes SSSI - a Site of Special Scientific Interest. Summer flooding is not unknown, and at such times many birds are prevented from breeding in the area.[1]

It is of national importance for Bewick's Swan and Whooper Swan. It also attracts wintering birds of prey, including Hen Harrier, Merlin, Peregrine Falcon and Short-eared Owl. Redshanks, Lapwings and Snipe breed on the Washes in spring.

There are ten birdwatching hides (six RSPB and four wildlife trusts) one of which is wheelchair accessible.

RSPB Ouse Washes is a nature reserve, managed by the Royal Society for the Protection of Birds at Welches Dam. It is signposted from the village of Manea (6 miles east of Chatteris, between Ely and March). The visitor centre is open 9 am to 5nbsp;pm daily except Christmas Day and Boxing Day.

WWT Welney is one of nine wildfowl and wetland reserves managed by the Wildfowl & Wetlands Trust. The reserve is at Welney in Norfolk, 12 miles north of Ely, 26 miles north of Cambridge and 33 miles east of Peterborough.