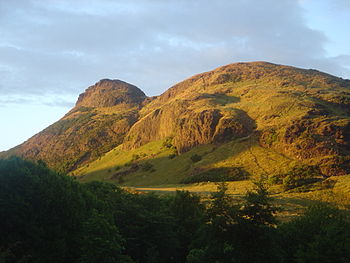 Holyrood Park (also called the Queen's Park or King's Park depending on the reigning monarch's gender) is a royal park in central Edinburgh about a mile to the east of Edinburgh Castle. It has an array of hills, lochs, glens, ridges, basalt cliffs, and patches of gorse, providing a remarkably wild piece of highland landscape within its 650-acre area. The park is associated with the royal palace of Holyroodhouse and was formerly a 12th-century royal hunting estate. The park was created in 1541 when James V had the ground "circulit about Arthurs Sett, Salisborie and Duddingston craggis" enclosed by a stone wall.[1] Holyrood Park is now publicly accessible. Arthur's Seat, the highest point in Edinburgh, is at the centre of the park, with the cliffs of Salisbury Crags to the west. There are three lochs; St Margaret's Loch, Dunsapie Loch, and Duddingston Loch. The ruined St Anthony's Chapel stands above St Margaret's Loch. Queen's Drive is the main route through the Park, and is partly closed on Sundays to motor vehicles.[2] St Margaret's Well and St Anthony's Well are both natural springs within the park. Holyrood Park is located to the south-east of the Old Town, at the edge of the city centre. Abbeyhill is to the north, and Duddingston village to the east. The University of Edinburgh's Pollock Halls of Residence are to the south-west, and Dumbiedykes is to the west.

Arthur's Seat is the main peak of the group of hills which form most of Holyrood Park. The hill rises above the city to a height of 823 ft, provides excellent views, is quite easy to climb, and is a popular walk. Though it can be climbed from almost any direction, the easiest and simplest ascent is from the East, where a grassy slope rises above Dunsapie Loch, a small artificial loch located between Dunsapie Hill and Arthur's Seat. The loch is fed with water from Alnwickhill in the south of the city, and is a popular location within the park, supporting several bird species.

Salisbury Crags are a series of 150-ft cliffs at the top of a subsidiary spur of Arthur's Seat which rise on the west of Holyrood Park. Below the foot of the cliffs is a large and steep talus slope falling to the floor of Holyrood Park with a track known as the Radical Road running in the space between the two. This track was given its name after it was paved in the aftermath of the Radical War of 1820, using the labour of unemployed weavers from the west of Scotland at the suggestion of Walter Scott.[3]

On the basis of it simply being the same name, Hugo Arnot derived the name from |the first Earl of Salisbury who accompanied Edward III on one of his invasions of Scotland.[4] Grant's view of this is that it was "an idle story" and quoted Lord Hailes' derivation from Anglo-Saxon meaning "waste or dry habitation".[5] 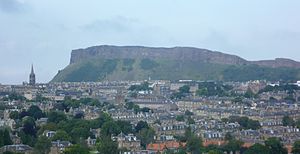 Salisbury Crags seen from Blackford Hill
There is another theory that the word "Salisbury" is an English rendition of the Gaelic Selyg or Selych meaning Willow, thus Salisbury becomes Willow Brae, which mirrors the name of the hill at its opposite side, also Willow Brae.

The cliffs are formed from steep dolerite and columnar basalt and have a long history of rock climbing on their faces starting from the earliest days of the sport. Harold Raeburn was brought up nearby, and became the leading climber of the Scottish Mountaineering Club not long after he joined it in 1896.[6] By 1900 a number of traditional climbing and sport climbing routes had been recorded by Raeburn and W. Inglis Clark.[7] In recent years the park rangers (previously under the auspices of the Royal Estate and now Historic Scotland, who had taken over management of the park) attempted to regulate access to the cliffs due to hazards to park visitors from loose and falling rocks. Climbers are now restricted to a designated area of the South Quarry, and need to apply for a permit, free of charge, at the education centre in the north of the park in order to be allowed to climb.[8] There is still some activity, though most of it is bouldering rather than free climbing. The finest areas are in the two quarries, although it is only in the South Quarry that climbing is still permitted at this time. The south quarry contains the Black Wall, a well-known bouldering testpiece in the Edinburgh climbing scene. The best known route to climb the Crags is at "Cat Nick" or "Cat's Nick"[9][10][11] which is a cleft in the rocks near the highest point of the Crags. This is named on maps, sometimes leading people to believe that the highest point of the crag is itself so named.

Samson's Ribs are a formation of columnar basalt. 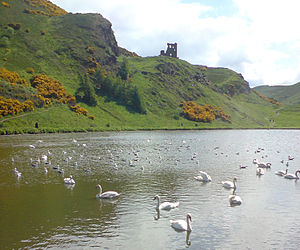 St Margaret's Loch is a shallow man-made loch to the south of Queen's Drive. It is around 500 yards east of Holyrood Palace, and about 100 yards north of the ruin of St Anthony's Chapel. Once a boggy marshland, the loch was formed in 1856 as part of Prince Albert's improvement plans for the area surrounding the palace. The loch has been used as a boating pond but is now home to a strong population of ducks, geese, and swans.

Other geographical features include the Haggis Knowe, Whinny Hill and Hunter's Bog, which drains into St Margaret's Loch.

There are traces of prehistoric hill forts within the park, notably on the rocky knoll above Dunsapie Loch. The remains of cultivation terraces can be seen on the eastern slopes of Arthur's Seat.

The ruined Augustinian Abbey of Holyrood was established in 1128, at the order of King David I, within his royal deer-hunting park. The Abbey was in use until the 16th century. It was briefly used as a Chapel Royal by James VII, but was finally ruined in the mid-18th century.

The Royal Palace of Holyroodhouse began as a lodging within the Abbey, but eventually grew into a substantial palace. James IV had the first buildings constructed around 1500, although the bulk of the present building dates from the late 17th century, when it was remodelled in the neo-classical style by Sir William Bruce. It remains as the official residence of the British monarch in Scotland. 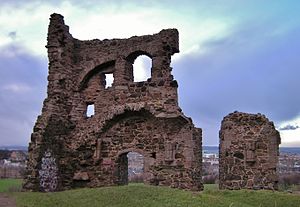 It was originally rectangular in shape, around 43 by 18 ft, with three-foot-thick walls, and was built with local stone. The tower would have stood just over 39 ft high, and probably had a spiral stair inside. The chapel is now a ruin: only the north wall and a fragment of west wall remain next to part of an ancillary building.[12]

Although in ruinous condition we do have some idea of what the chapel may once have looked like from historical and archaeological research. 18th-century records describe it as being:

"a beautiful Gothick building, well suited to the rugged sublimity of the rock ... and its west end there was a tower .. about forty feet high." - Hugot Arnot, The History of Edinburgh 1779 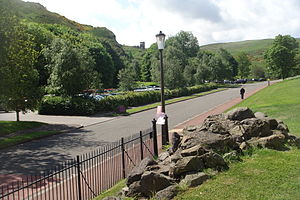 Muschat's Cairn – St Anthony's Chapel can be seen in the distance, centre top

This cairn is situated by the Duke's Walk at the eastern (Meadowbank) end of Holyrood Park. It commemorates an event on 17 October 1720 when Nichol Muschat, a surgeon, dragged his wife to a nearby spot and brutally murdered her. He was eventually tried and hanged for this crime. At his trial he said that he had simply tired of her.

The present cairn consists of boulders cemented together[13] and was erected in 1823 replacing an earlier cairn which had been removed c.1789. This earlier cairn was formed over several years by the tradition of laying stones on the cairn "in token of the people's abhorrence and reprobation of the deed". It was situated some way to the west of the present cairn with Sir Walter Scott placing it about a furlong to the east of St Anthony's Chapel.[14] Scott mentions the cairn several times in the novel, The Heart of Midlothian, by siting Jeanie Dean's tryst with the outlaw, George Robertson, at this spot. The site of the so-called Jeanie Deans Cottage can also be seen in Holyrood Park at the south end of St Leonards Bank.