Hingston Down is a hill in eastern Cornwall, not far from Gunnislake.

The hill is usually accepted as the place mentioned in an entry in the Anglo-Saxon Chronicle for 835 (corrected by scholars to 838) which says that Egbert]] king of the West Saxons defeated an army of Vikings and Cornish at the Battle of Hingston Down. The name of the hill is Old English; Hengestdun, meaning 'Stallion Hill'. 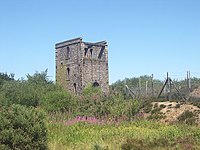 Engine House on Hingston Down

The Hingston Down Consols mine on the hill is the type locality for the mineral Arthurite,[1] which was discovered here.[2] There is also a quarry on the hill,[3] which forms the Hingston Down Quarry & Consols SSSI (Site of Special Scientific Interest), noted for its mineralisation.[4]