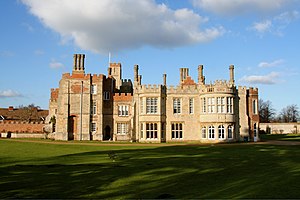 Hinchingbrooke House stands in Huntingdonshire to the west of the county town, Huntingdon. It was built around an 11th-century nunnery but after the Reformation the lands of the convent passed into the hands of the Cromwell family, and subsequently, became the home of the Earls of Sandwich (including John Montagu, 4th Earl of Sandwich, reputedly the inventor of the modern sandwich).

The nunnery of Hinchinbrook was dissolved in 1538 during the Dissolution of the Monasteries under King Henry VIII; a process supervised nationally by Thomas Cromwell. On 8 March 1538, Thomas Cromwell's maternal nephew, Richard Williams (alias Cromwell), had the grant of the nunnery of Hinchinbrook, in Huntingdonshire, for the price of £19. 9s. 2d. while he was an official Visitor overseeing the dissolutions.[1] Richard's son, Henry Williams (alias Cromwell), a grandfather of Oliver Cromwell, built the house adjoining to the nunnery,[2] and upon the bow windows he put the arms of his family, with those of several others to whom he was allied.[3]

In 1970, the house became part of Hinchingbrooke School,[4] housing the 6th form.

Hinchingbrooke School was formerly Huntingdon Grammar School which, on the site of what is now the Cromwell Museum in Huntingdon, was attended by Oliver Cromwell and later by Samuel Pepys.[5][6] The school now has around 1900 pupils.[7]

More recently, while still being used as a school, Hinchingbrooke House has also become used as a conference centre, and is also for, dinner dances and as a wedding venue. It is a Grade I listed building and is open for tours on Sunday afternoons in the summer season.[8][9] [10]