Hilton is a hamlet in Berwickshire, in the south-east of the county close the River Tweed, which forms the boundary with Northumberland. Hilton is on a lane just east of Whitsome, and falls within its church parish. To the east is Winfield Airfield, otherwise known as Horndean Airfield,[1] which in the First World War served a landing ground of No. 77 Home Defence Squadron from 1916: an emergency landing ground in case engine failure or bad weather prevented an aeroplane from returning to one of its more permanent bases. It was used also in the Second World War.

There was once a parish church at Hilton, but in 1735 the parish was merged into that of Whitsome and thereafter the church was allowed to fall into decay. Now little remains.[2]

The old church stood on a small hill and the hamlet's few cottages are clustered there, from which situation the name ‘Hilton’ appears to derive.[3] 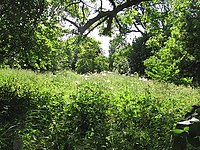 Woodland beside the ruins of Hilton Church

This Berwickshire article is a stub: help to improve Wikishire by building it up.
Retrieved from "https://wikishire.co.uk/w/index.php?title=Hilton,_Berwickshire&oldid=44554"
Categories: