Hilfield Castle, also Hilfield Lodge,[1] is a country estate and house to the east of Bushey in Hertfordshire, (from which it is separated by the M1 motorway) and about two miles east of Watford and a mile south-west of Aldenham.

The house is a Grade-II* listed building.[2]

The estate contains two large reservoirs, one of which were built by French prisoners of war in the 1790s,.[3] The grounds now form Aldenham Country Park.

Elstree Aerodrome is located just to the east and the M1 motorway passes to the west. 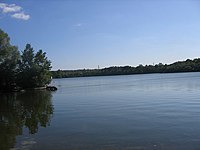 The castle dates to 1798-99, when it was built by architect Jeffry Wyatt for Hon. George Villiers, brother of the earl of Clarendon, to replace Slys Castle. It is a picturesque Gothic design, and the estate includes numerous cottages, barns and a boathouse on the reservoir.

Nikolaus Pevsner notes that it is a "castellated, turreted, and cemented house with a gatehouse complete with portcullis".[4] He also notes that the entrance and south sides are symmetrical and that the conservatory is of "ecclesiastical appearance."

The castle is built from brick with a 4-storey central tower "flanked by octagonal turrets to lower 4-storey bays with outer 2-storey bays with a later mansard attic."[2] The turrets have slit windows, which are machicolated and crenellated. Of note is the "octagonal Breakfast Room with a vaulted ceiling and a Gothic conservatory."[5]

The house is owned by the Jefferis family as a private house and is not open to the public.[6]

The castle was built in 1798-99 for the Hon. George Villiers, brother of the earl of Clarendon, to replace Slys Castle.

The huose and estate were sold in 1818 by Villiers to John Fam Timins. He had served in the British East India Company, for whom he had captained several East Indiamen; he had most notably participated in the Battle of Pulo Aura. When he died in 1843, his son William Raikes Timins succeeded him. He died in 1866, and was succeeded by his nephew the Rev. Douglas Cartwright Timins, who died in 1872, when Hilfield passed to his son Douglas Theodore, who sold the house and park in 1906 to the late Lord Aldenham.[7][8]

The reservoir nearest to the house is called Hilfield reservoir and is owned by Affinity Water. It is managed as a wildlife reserve by the Herts and Middlesex Wildlife Trust and is not open to the public except by appointment.[9] It was built in 1953.

The more southerly reservoir is called Aldenham reservoir and forms part of Aldenham Country Park. It is open to the public with trails and other attractions [10] and hosts a sailing club.[11] It was built by French prisoners of war during the Napoleonic War. Today it is under constant threat of housing development.

The castle's close proximity to Borehamwood Studios and charismatic appearance has seen it feature in several TV series and films, including: