Higham Gobion is a tiny village in the Flitt Hundred of Bedfordshire, standing between the villages of Shillington and Barton-le-Clay. The hamlet shares a civil parish with Shillington.

This is a hilltop hamlet, which consists of a church, farm and small industrial unit and one or two houses, gets the second part of its name from the Gobion family, who resided in this area after the Norman invasion of 1066. In the fields a mile north-east of the church are triangular earthworks and mediæval fishponds, all that remain today of a substantial deserted mediæval village. Roman pottery has also been found in the field east of the former Rectory.

The parish church, dedicated to St Margaret, dates from around 1300, but was much restored during the Victorian period.

It contains a monument to Dr. Edmund Castell, who died in 1674 and was a Professor of Arabic at Cambridge. He was a rector at Higham during the last years of his life and lived in the adjoining (and much restored), former rectory. There is also a memorial to the Cassels and a set of brasses. 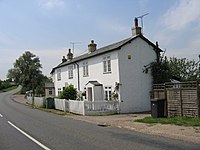