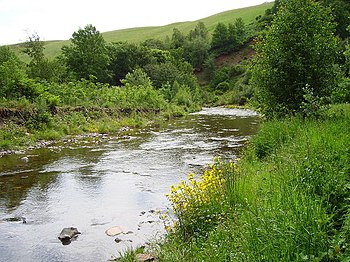 The Heriot Watyer below Heriot

The Heriot Water is a river of Midlothian, among the Moorfoot Hills, which becomes the Gala Water.

The river rises in the Moorfoot Hills in the union of streams beneath Whiteside Law. The stream which conjoin to form here the Heriot Water rise on the slopes of Blackhope Scar, on the boundary of Midlothian with Peeblesshire, and the Dewar Burn from the anonymous slopes to the south.

The new-forged Heriot Water flows to the north-east, then eastward, to Heriot Mill and then on to join the southward-flowing Gala Water at the bridge at Haltree.

Although the Gala Water here is much the smaller stream, the continuing river is called the Gala Water below this point, until it enters the River Tweed at Galashiels.