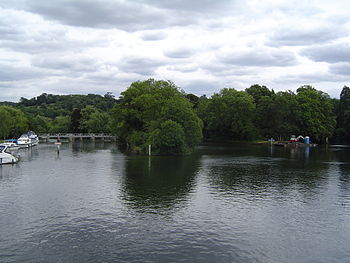 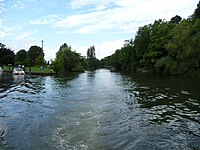 The south end of Hedsor Water

Hedsor Water is the original course of the River Thames near Cookham, Berkshire, which is now accounted a backwater of the river. It leaves the navigable channel of the Thames above Cookham Lock and rejoins at the tail of the lock cut, running alongside Sashes Island.[1]

As Hedsor Water was once the main course of the Thames it marks is the county boundary between Buckinghamshire to the east and Berkshire to the west. This stretch of river was by-passed for navigation by the construction of Cookham Lock in 1830. Navigation is only possible for the first 100 yards from the downstream end where a few temporary moorings are available.

Cookham lock opened in 1830, but no weir was built at this time. In 1832 Lord Boston of Hedsor House claimed compensation for loss of towpath rights along Hedsor Water which he was granted. In 1837 a weir was found necessary and built across Hedsor Water, leading to further litigation from Lord Boston for loss of trade to the wharf he owned there. Hedsor Wharf, on the upper reach of Hedsor Water had been an important trading post. The paper made at nearby Cookham Paper Mill was shipped from there and the stone used to build Shardeloes was brought from Oxford to Hedsor Wharf. This time the only compensation he received was the building of a flash lock in the weir. This was removed when the lock was rebuilt in 1869, as Lord Boston had built eel bucks in the stream in the meantime.[2]

In 2003 Hedsor Water was the subject of a High Court judgement against Josie Rowland, the widow of Tiny Rowland and current owner of Hedsor Wharf Estate, who wanted to stop the Water being used as a public right of way.[3]