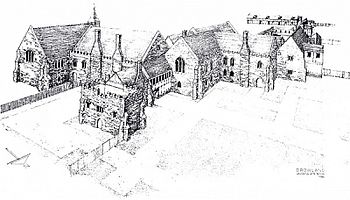 A modern reconstruction of Havering Palace as it would probably have appeared in 1578, viewed from the north-east.

Havering Palace was an old royal residence in the village of Havering-atte-Bower, Essex. It was abandoned in 1686, and by 1816 no walls remained above ground.

It stood to the north and west of Havering's parish church of St John the Evangelist, which was one of the palace’s chapels. 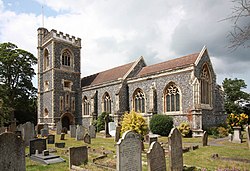 The earliest references to a royal demesne at Havering date from the time of Edward the Confessor, and although there is no definite proof that he ever visited it, the strength of local legend suggests he did. It was definitely a royal manor by the Norman Conquest when it passed to William the Conqueror. The royal manor also gave the surrounding area the designation of the Royal Liberty of Havering, which gave those living in the area freedom from taxation and other benefits. The manor was granted to Queen Eleanor by Henry III in 1262 and thereafter usually belonged to the queen consort or dowager (the queen mother) until the death of Jane Seymour in 1537,[1] leading to the 'Bower' portion of the village's place name.

A house was already there by the 12th Century, and extensive building took place in the 13th Century. Many royalty from then on are recorded as having stayed there, James I being the last to do so regularly. In 1358 Edward III held a five-month Marshalsea Court at Havering Palace for locals to air their personal grievances, an unusual act since the Marshalsea Court was reserved for the royal household. By the 17th Century it was in poor condition, and Charles I was the last monarch to stay there in 1638. After the Restoration the house (by then called Havering House) was occupied by the Earl of Lindsey but despite evidence of considerable sums of money being spent on repairs, it became vacant some time between 1686 and 1719, when it was reported to be in ruins. Stone from it may subsequently have been used for other local buildings, as by 1816 no walls were visible above ground.[1]

At its greatest extent before decay set in, most of the palace dated from the major building works of the 13th century with a newer block built in 1576-7. The plan was irregular, containing a great chamber, royal apartments, two chapels, and various out-buildings.[1] The parkland surrounding it covered most of the ancient parish of Havering-atte-Bower west of the main road (now North Road) and was much more extensive than the current Havering Country Park, which covers the part of the former park adjoining the site of the palace and is the 18th-highest hill in the metropolis.

Royalty and other famous people who have resided in the palace at some point include: