Hatley in Cambridgeshire consists of two hamlets barely half a mile apart:

These villages are on the unclassified road between the villages of Gamlingay and Croydon, 12 miles south-west of the city of Cambridge and eight miles southeast of St Neots. The joint civil parish covers an area of 2,367 acres. Across the Bedfordshire border to the southwest is Cockayne Hatley, unlinked to its namesakes except by footpaths.

Around one-third of the parish is occupied by Hatley Park, an area of private landscaped parkland south of the road,[1] formerly owned by Sir John Astor MBE.[2]

Around half of the land in Hatley parish belongs to the Hatley Park Estate. 76% of land is used for crops or fallow land; 9.5% is covered by grass, 4.9% by woodland and 7.1% by set-aside. Wheat, barley and rapeseed are grown. In summer, the estate's parkland is grazed by beef cattle and by sheep in winter. The yard at Church Farm, owned by the estate, has been converted to small business units. One other farm is in the parish and two neighbouring farmers use land in it.[3]

East Hatley is a row of houses along a smaller road (TL285505). It was formerly known as Castell Hatley.[1] In 1929, the hamlet was owned by the Master and Fellows of Downing College, Cambridge.[4] Sir George Downing, 1st Baronet, after whom Downing Street is named, owned land in East Hatley (his grandson, Sir George Downing, 3rd Baronet, founded Downing College).[5]

Historically, East Hatley housed local farm labourers. Now, few agricultural workers live there and it has been described as a 'small, middle-class commuter settlement'. The houses are mainly privately owned but there are three council-owned bungalows. There is little interaction between East Hatley and Hatley St George.[3]

East Hatley's church, dedicated to St Denis, has been disused since 1980. It is a Grade II* listed building.[6] 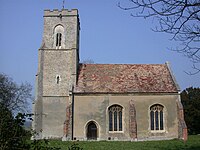 Hatley St George consists of a row of houses along the Gamlingay-Croydon road. It has a small shop and post office,[7] (subsidised by the estate)[3] a playing field, playground and cricket club.

It is presumed that the hamlet's name is derived from that of the St George family, who were the principal landowners from the 13th century to 1658.[8] Hatley St George is an 'estate village' - Hatley Park Estate owns all the houses except for five. About a third are used for current and retired estate workers, with the others rented out.[3]

Hatley St George has a church, dedicated to St George, which was first built in 1352. It is a Grade II* listed building.[9]

The Hatley name was in use as early as 986,[8] derived from the Old English 'leag', a meadow or woodland clearing.[10] The spelling Hatelaie was used in the 1086 Domesday Book.

The parishes were known as 'Hungry Hatley' by 1218, possibly because the clay soil could not be cultivated effectively until mechanisation in the 20th century.[5] The adjoining parish of Cockayne Hatley, in Bedfordshire, is said to be unconnected to the Cambridgeshire Hatleys.[11]

The parish was established in 1957 when the parish of Hatley St George was united with East Hatley.[8]

Hatley village hall was built by the estate in 1960.[8] It was run as a social club before it became financially unviable, closing in 2005, and is now run by the Parish Council.[14] 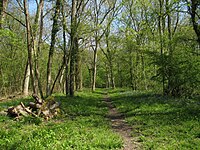 There are remnants of ancient woodland: Buff Wood, south-west of East Hatley, is a Site of Special Scientific Interest (SSSI) owned by the estate and managed by the local Wildlife Trust,[17] and Hayley Wood, another SSSI,[18] borders the parish in the north.