Cockayne Hatley is a small village in Bedfordshire dating back to Saxon times; a place with an estimated population of just 75 in 33 houses). It borders on Cambridgeshire, across which border are found Hatley St George and East Hatley, though no lane joins these with Cockayne Hatley. The edge of Huntingdonshire is close by also.

Alone in the meadows, reached at the end of a single lane, Cockayne Hatley is to be found 3 miles east of Potton, 6 miles northeast of Biggleswade and 9 miles southeast of St Neots.

The soil is strong clay with clay subsoil. The chief crops are wheat, oil seed rape, beans and peas. The farmland surrounding the village belongs to a Danish family-owned business which grows produce for its own retail operations across Europe. 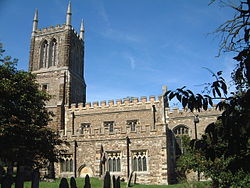 The Church of St John the Baptist stands at the gates of an ancient hall and dates to the thirteenth century. It contains numerous high quality works of carved wood and stained glass, mostly from the abbey of Alne near Charleroi. Dating from 1689, these works were "liberated" from Flanders following the Napoleonic Wars by the Rev. Henry Cockayne Cust, parish rector from 1806 to 1861.[1]

The churchyard contains a handsome monument over the grave of the poet W E Henley, the author of the poem "Invictus". Henley was a frequent visitor to Cockayne Hatley Hall. (He had a wooden leg, and is claimed to have been Robert Louis Stevenson's model for Long John Silver.)

Cockayne Hatley Hall, once known as Cockayne Hatley Mansion, was originally established by Sir John Cockayne in the 14th century. The Hall has been added to and rebuilt many times. The main parts of the present building are early Victorian with the East wing dating back to the reign of George I. There is still a single wall and fireplace dating back to Tudor times.

The Cockayne family continued to reside at the Hall until the late 1860s. Several families took on the Hall and the Estate until 1929 when Mr John Whitehead purchased the estate and eventually established the largest apple orchard in England with over one million Cox's Orange Pippin trees, until they were dug up and burned as uneconomic in 1974.[2]

A fire destroyed much of the south facing building in 1931. Although repaired, many of the grand rooms and architecture were lost. Mr Whitehead left the Hall shortly after the war selling the whole estate to the Co-op Farming group. Much of the property subsequently fell into disrepair before the Hall, together with some of the surrounding land, was sold back to private ownership. Now greatly restored, the Hall and the adjacent Church of John the Baptist reflect the affluence of its history.

From 1894 to 1897 the Hall was rented by part of the "Old Family Line", the Duke of Rutland. His daughter, Lady Diana Manners, lived there as a young girl before going on to earn the widespread reputation as the most beautiful young woman in England, and appeared in countless profiles, photographs and articles in newspapers and magazines including the front page of Time magazine in February 1926.