Harringworth is a village and parish in Northamptonshire, adjacent to the border with Rutland, on the southern bank of the River Welland. The village lies around five miles north of Corby. At the 2001 Census, the population of the parish was 247,[1] falling to 241 at the 2011 Census.[2]

The area is dominated by the Welland Viaduct (known locally as the Harringworth Viaduct) that gracefully crosses the Welland and its flood plain immediately to the west of the village.

In 1086 was considered a large village in the hundred of Corby,[3] one of many possessions of the Countess Judith. During the mediæval period, Harringworth was associated with the la Zouche family who were Lords of the Manor and, commencing with William la Zouche, 1st Baron Zouche, were summoned to Parliament as Barons. 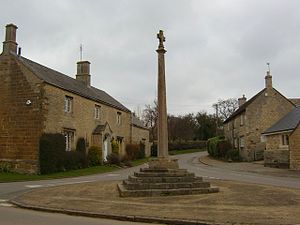 This Northamptonshire article is a stub: help to improve Wikishire by building it up.
Retrieved from "https://wikishire.co.uk/w/index.php?title=Harringworth&oldid=45946"
Categories: