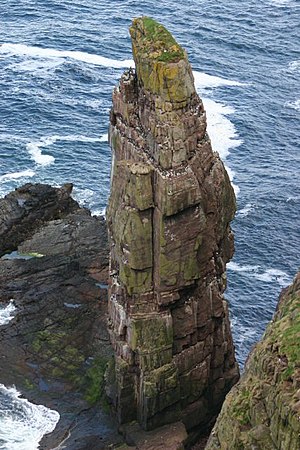 A small sea stack on Handa

Handa is an island off the west coast of Sutherland, forming part of the parish of Eddrachillis. It is 760 acres in size and reaches 404 feet at its highest point.

A small ferry sails to Handa from Tarbet on the mainland and boat trips operate to it from Fanagmore.

It is a Scottish Wildlife Trust nature reserve.

The island is composed of Torridonian red sandstone[1] and surrounded by cliffs covered with birds. 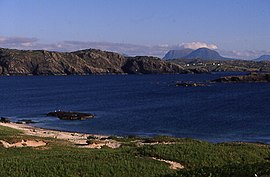 In the north is a hill with two peaks, with the south and east being lower lying. The north and west have 330-ft-high cliffs, and there are beaches in the south and east. The Sound of Handa separates it from the mainland and smaller islands around Handa include Glas-Leac to the south, Eilean an Aigeach to the north-east and Stac an t-Sealbhaig to the north.

Handa is part of the North-West Sutherland National Scenic Area, one of 40 in Scotland.[2]

The island's name is of mixed Gaelic and Norse origin and means "island at the sandy river".

Anciently the island was used as a burial place, and there are still the remains of a chapel in the south east, commemorated in the name Tràigh an Teampaill (Beach of the Temple).

It had a population of 65 in 1841, but in 1848 potato famine forced the inhabitants to emigrate. In some ways this is surprising, since it is recorded that the islanders had a fairly varied diet including oats, fish and seabirds, rather than depending heavily on a potato crop. The islanders had a parliament, similar to that of St Kilda, which met daily, and the oldest widow on the island was considered its "Queen".[1]

At one time, wolves dug up graves so frequently that the inhabitants of Eddrachillis resorted to burying their dead on Handa.[3]

On Ederachillis’ shore
The grey wolf lies in wait,—
Woe to the broken door,
Woe to the loosened gate,
And the groping wretch whom sleety fogs
On the trackless moor belate.

Thus every grave we dug
The hungry wolf uptore,
And every morn the sod
Was strewn with bones and gore:
Our mother-earth had denied us rest
On Ederchaillis’ shore

The Great Stack of Handa was first climbed from the sea on 1 August 1969 by Graeme Hunter, Hamish MacInnes & Douglas Lang.[5]

The island is now part of the Scourie Estate, owned by Dr Jean Balfour and J.C. Balfour[6] and managed by the Scottish Wildlife Trust with a population of just one warden and a handful of volunteers[7] during the summer months.

Handa is noted for its birdlife, which includes puffins, razorbills and guillemots.

The island is an Site of Special Scientific Interest, and was leased to the Royal Society for the Protection of Birds, originally for 25 years. Following this it was taken over by the Scottish Wildlife Trust. Despite being a reserve, the island receives five thousand visitors per annum.[1]