Gretton is a small village at the foot of the western scarp of the Cotswolds, about nine miles north of Cheltenham in Gloucestershire. The population taken in mid-2016 was 475.

The place-name 'Gretton' is first attested in 1175, and means 'village or town on gravelly soil'.[1]

The village has a small primary school. 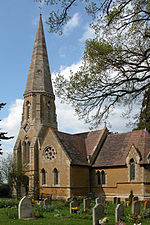 The parish church is Christ Church. The earliest reference to a church in Gretton is in the Abbey’s 'Landboc' and refers to its chaplain, Thomas, during the reign of Henry III, though the church may have been older than this. This church was replaced in the fifteenth century. The latter mediaeval church though had fallen into ruin by the 19th century. The current church replaced it: it was built in 1868 to a design of John Drayton Wyatt, principally funded by Emma Dent of Sudeley Castle.[2]

The new church was built on a different site and when in 1868 the new church was dedicated, the nave of the old one demolished. The site of the old church is still visible, the foundations of the nave are exposed and the 15th century tower is still standing. Masons' marks matching those at the church in Sudeley suggest a date of 1460. 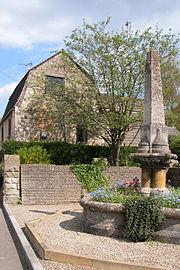 The church is built to follow the style of the mid to late 13th century style throughout. The tower is in three stages, topped by an octagonal spire. It is a Grade II listed building.[3]

The village was once served by Gretton Halt railway station which closed in 1960. Today the Gloucestershire Warwickshire Railway passes the site of the former halt.