Greenwich Town Hall is a municipal building in Greenwich, Kent which was for many years the headquarters of Greenwich's civic government. It is a Grade II listed building.[1] The complex is in two parts: the main building, the Town Hall, with frontages on Royal Hill and the High Road, is now known as 'Meridian Hall' while the separate but adjoining building to the south is the Borough Hall. They are all of a piece architecturally in a grand version of the Art Deco style and cannot in all seriousness be considered amongst Greenwich's prettiest buildings. 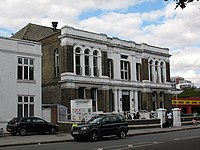 The Town Hall was commissioned to replace the old town hall in Greenwich High Road which had served as the headquarters for the Greenwich District Board of Works before becoming the home of the Metropolitan Borough of Greenwich.[2]

The site chosen for the new building had previously been occupied by the old Greenwich Theatre.[3] The new building, which was designed by Clifford Culpin in the Art Deco style, was completed in 1939.[1] It shows the influence of Hilversum town hall in the Netherlands.[1] The south east wing of the building, known as the Borough Hall, contained the council chamber.[1] Sir Nikolaus Pevsner wrote that Greenwich Town Hall was "the only town hall of any London borough to represent the style of our time adequately".[4] The tower is 183 feet high.[5]

The building was the headquarters of the Metropolitan Borough of Greenwich until the borough was merged with its neighbour in 1965 to form a new authority which chose to locate its new headquarters at Woolwich Town Hall.

After the town hall ceased to be the local seat of government, it was extensively altered to create floors in the area of the council chamber in 1974.[1] It was renamed 'Meridian House', in recognition that the Greenwich Meridian goes through Greenwich,[6] though not through the building, and it became the home of GSM London at that time.

Meanwhile, the neighbouring Borough Hall was used as a concert venue: the band Squeeze gave their first performance there in 1975,[7] as commemorated by a blue plaque on the side of the building.[8] The Borough Hall went on to become the home of Greenwich Dance from 1993[9] until the organisation moved out in 2018.[10]