Great Barford is a village in Bedfordshire, a few miles north-east of Bedford, on the River Great Ouse.

The village is bypassed by the busy A421 road on the way between the county town, Bedford, and St Neots in Huntingdonshire; the bypass opened on 24 August 2006 after many years of local campaigning. The Golden Cross, once a pub well known to travellers, is now left isolated in the village by the bypass and has become a Chinese restaurant.

The village is known for its All Saints Church, with a 15th-century tower, and its similarly ancient bridge. The surroundings and historic buildings make it a favoured destination for canoeing, angling and picnics.

Nearby places include Renhold and Blunham. 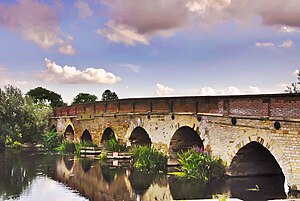 Great Barford is listed in the Domesday Book and appears then to have been as an important site, probably as a means of crossing the Great Ouse that skirts the village. Although the area of the original ford was dug up in 1973, the bridge has existed since at least the 15th century.

The village itself is large and scattered but the majority of the houses are in the south-east of the parish. Throughout the village there are a large variety of houses some dating to the 17th century.

In the village once stood Great Barford Castle, a Norman motte and bailey castle, which stood to the north of the village, but a priory was later built on its location.

A very early reference to Barford may perhaps be found in a charter by which Offa, King of Mercia, in 792 confirmed various lands to the monastery of St. Albans. The charter purports to have been granted in the place which is called 'Æt beranforda.' The text of the charter is certainly spurious, but the witnesses and dating clause may well have been taken from a genuine instrument. Even so, however, the identification with the present Barford cannot be considered certain.