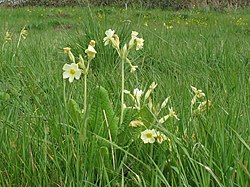 Great Bardfield is a large village and parish in Essex, located approximately nine miles north-west of the town of Braintree, and approximately 12 miles south-east of Saffron Walden.

The village came to national attention during the 1950s as home to the Great Bardfield Artists.

Henry VIII is said to have given Bardfield to Anne of Cleves as part of his divorce settlement and a number of buildings in the village are associated with Anne of Cleves, including the Grade II-listed Great Lodge and its associated Grade I-listed barn, now named after her. The 1,000-acre grounds include a Grade I-listed barn and a vineyard.[2] Great Bardfield is home to the Bardfield Cage, a 19th-century village lock-up, and the Gibraltar Mill, a windmill which has been converted to a house.

Great Bardfield played an important role in the history of the oxlip which, in the UK, is a rare plant only found where Suffolk, Essex and Cambridgeshire meet. Originally it was thought that oxlips were cowslip-primrose hybrids but in 1842 Henry Doubleday and Charles Darwin conducted tests on plants collected from Great Bardfield and concluded that this was not so. For a while the plant was known as the Bardfield Oxlip. The common cowslip-primrose hybrid is known as the False Oxlip.[3][4]

Bardfield is the home of many important twentieth-century English artists who hosted a series of important 'open house' exhibitions in the village during the 1950s. These exhibitions garnered national press attention and attracted thousands of visitors. The Great Bardfield Artists of the 1940s and 1950s were: John Aldridge, Edward Bawden, George Chapman,[Stanley Clifford-Smith, Audrey Cruddas, Walter Hoyle, Michael Rothenstein, Eric Ravilious (who lodged with Bawden at Brick House), Sheila Robinson and Marianne Straub. Other artists linked to the art community include Joan Glass, Duffy Ayers, Laurence Scarfe and the political cartoonist David Low.

Each year there is a village garage sale. In 2017 it is on Saturday 6th May. A real ale festival is held each August Bank Holiday in the village pub garden of the Vine

This Essex article is a stub: help to improve Wikishire by building it up.
Retrieved from "https://wikishire.co.uk/w/index.php?title=Great_Bardfield&oldid=53489"
Categories: