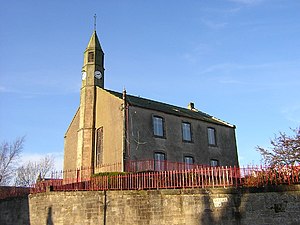 Glassford is a parish and small village in Lanarkshire, located five miles south of Hamilton, and two miles north-east of Strathaven. The parish contains the villages of Glassford and Chapelton and has a population of roughly 500-600 people. Features include the Parish Church, erected in 1820 and the remains of the 17th-century old church, both of which are category B listed buildings. The Avon Water offers fishing and walks.

When the village around the parish church began to expand to the north-west in the seventeenth century it was called West Quarter. This name persisted until the mid-nineteenth century when the Post Office was established and it was discovered that there was another West Quarter elsewhere so as a result the village took on the name of the parish.