Strathaven is a historic market town in Lanarkshire, and is the largest settlement in Avondale, the valley of the Avon Water.

The town was granted a Royal Charter in 1450, making the Town of Strathaven a burgh of barony. The town's main industry was weaving in the 19th and early 20th centuries, however this declined when faced by competition from Glasgow. The industrial revolution bypassed the town as it had little to offer in the way of natural resources, and thus has grown into more a commuter settlement, however it is still the main service centre for the surrounding area of Avondale. The current estimated population is 7,500.

The town is located on the edge of the valley of the Avon Water, around six miles from Hamilton, and 18 miles from Glasgow. The A71, which connects Edinburgh and Kilmarnock passes through the town. The town also has a grass airfield, Strathavon Airfield, about two miles to the north-west, off Lethame Road. 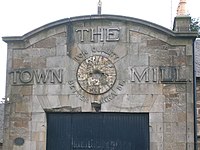 Detail of the advertisement on the town mill

A Roman road passes close by the town, on the south side of the Avon Water, which led to the Roman fort at Loudoun Hill near Darvel.

In the town, on a bend of the Powmillon Burn, stand the ruins of Strathaven Castle. Its origins are obscure, but it is believed to have been built around 1350 by the Bairds. Today a single tower remains and sections of wall beside the A71.

The Barony of Strathaven was acquired in 1362 by Archibald the Grim, Lord of Galloway, by his marriage to Joanna, daughter to Maurice de Moravia, 1st Earl of Strathearn, great Moray heiress. The settlement within the lands of Strathaven became a Burgh of barony in 1450.

The town still retains its traditional character despite the growth of more modern housing. The centre of the town is occupied by the market square, formerly a grassed common, and still known as Common Green, or just 'The Green'. Linking the town and the castle is the old 'Boo Backit Brig' ('bow-backed bridge'), a small arched bridge. The Old Parish Church, with its landmark spire, was built in 1772, and was the place of worship of the Duke of Hamilton who maintained a shooting lodge at nearby Dungavel House.

The town prospered in the 18th and 19th centuries as a weaving town, although there were many merchants living here too. The town played a significant part in the Radical War of 1820, when James Wilson led a band of radicals on a march to Glasgow, to join a rumoured general uprising, which never actually happened. Wilson was hanged for treason, and in 1846 a memorial was built in his honour in the town cemetery. The history of Strathaven is now documented in the town's John Hastie Museum.

Its most famous 'modern' resident was Sir Harry Lauder (1870–1950) whose mansion, Lauder Ha', or Hall, was just above the town on the road to Kilmarnock. Sir Harry spent the Second World War years there, and died in February 1950. The family retained the property until Death Duties of 65% forced a sale in the late 1960s.

Dungavel House on the outskirts of Strathaven was the location where German Deputy Führer Rudolf Hess originally intended to land on the evening of 10 May 1941 in a misguided attempt to seek peace talks with the Duke of Hamilton. However bad weather and poor navigation resulted in Hess having to land at Floors Farm in Eaglesham.

Despite competition from the nearby large towns of East Kilbride and Hamilton, Strathaven still has a number of craft and gift shops, alongside well known town centre names. There are two banks, Halifax Bank of Scotland and Royal Bank of Scotland office in the Common Green. There are a number of businesses providing extra attraction to the town. Brian Young's Garden Centre and Lawn Mower centre on Newton Road, The new Auction mart half a mile from Strathaven on the Hamilton Road. This includes a number of smaller businesses reflecting Strathaven's equestrian following (horses) and a small cafe. The town has long been Sunday Run territory with several town centre eating establishments as well as four public houses. The fifth pub until recently, The Castle Tavern, is no longer open due to a collapse during renovations in early 2011.

Strathaven Airfield is home to a microlight flying school, which operates both the traditional-style weightshift microlights and the light aircraft-style ones, and the new airfield manager's house was featured on Channel 4's Grand Designs in October 2013.[1] There are approximately 35 aircraft - both light aircraft and microlights - hangared at Strathaven in two modern purpose-built hangars.

The airfield was set up on the old Couplaw Farm, which The Scottish Flying Club Ltd bought in May 1964. The club had begun flying in 1927 at the old Renfrew Airport [2] but was left homeless after Renfrew was nationalised in 1946. Strathaven Airfield was given to the RAF Benevolent Fund in 1974 and then sold privately in 2005.

There is an active ecumenical body, consisting of six churches in the area (5 within the town, one nearby), named "Hope Strathaven", which work together bringing a mix of community projects that reflect faith and service.[8]