Gibraltar International Airport or North Front Airport (IATA: GIB, ICAO: LXGB) is the civilian airport that serves the British overseas territory of Gibraltar. The runway is owned by the Ministry of Defence for use by the Royal Air Force as RAF Gibraltar. Civilian operators use the civilian-operated terminal. National Air Traffic Services hold the contract for provision of air navigation services at the airport. In 2004 the airport handled 314,375 passengers and 380 tons of cargo.

The airport is built on the only available flat land of the territory; the narrow bank joining Gibraltar to Europe, and on land reclaimed from the Bay of Gibraltar. The runway extends into the sea. Winston Churchill Avenue, the main road heading to the land border with Spain, crosses over the airport runway, and consequently has to be closed every time an aeroplane lands or departs. (The History Channel programme Most Extreme Airports ranked the airport the fifth most extreme airport in the world.[1]

The airport is also used by people travelling to or from neighbouring parts of the southern Spain such as the Costa del Sol or the Campo de Gibraltar. 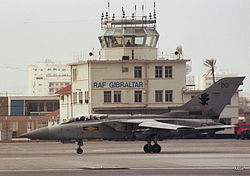 RAF Gibraltar, also formerly known as North Front, is a Royal Air Force station on Gibraltar; the station is a joint civil-military facility that also functions as the Rock's civilian airport by the name of Gibraltar International Airport. The civilian airport's passenger terminal building and apron facilities located on the north side of the runway while the apron and hangar of RAF Gibraltar are located on the south side of the runway.

No military aircraft are currently stationed there, but RAF, Commonwealth and aircraft of other NATO nations will periodically arrive for transient stopovers, exercises, or other temporary duty.

The RAF camp has also hosted a number of small Army units who performed various support roles from the camp over the years. There was 8 Surveillance Troop Royal Artillery who were responsible for (darkness hours) maritime radar security of the Rock during the border closure throughout the 70s and 80s. In addition to this there was also a Royal Engineer's Postal unit and a number of resident Infantry Battalion dog handlers - who were employed to supplement the RAF Police Dog Handling section. The accommodation block also provided facilities for a few members of the Royal Signals, WRAC and short stay transient visitors plus the occasional Royal Navy's Duty Frigate helicopter ground crews. The camp is now the Regimental Headquarters for the Royal Gibraltar Regiment - a unit of the British Army - consisting of both regulars and reservists and responsible for the local defence of the territory,

On 4 February 2011, The new RAF headquarters in Gibraltar was officially opened by The Chief of Joint Operations, Air Marshal Sir Stuart Peach.

'The Jaguar Building' is the result of several years of planning and follows the enhancement of transport links with Spain, which will include a tunnel at the eastern end of the runway. The latter however has been put on hold by the current administration of Gibraltar.

The old RAF site was needed for a new air terminal, so the Gibraltar Government agreed to pay for the new Headquarters and it was the perfect opportunity to put all sections under one roof. 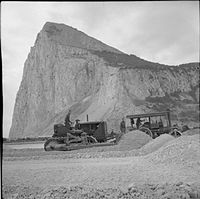 A bulldozer and steamroller being used during the construction of a new aerodrome, November 1941 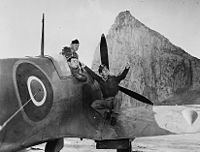 A Royal Naval Air Service seaplane base was opened at Gibraltar during the First World War.[3]

The aerodrome was built here by the Royal Air Force during Second World War, on the territory's race course (introduced by the Maltese). Originally opened in 1939, it was only an emergency airfield for the Royal Navy's Fleet Air Arm. However, the runway was later extended by reclaiming some land from the Bay of Gibraltar using rock blasted from the Rock of Gibraltar while carrying out works on military tunnels. This last major extension of the runway allowed larger aircraft to land at Gibraltar. At this time the airfield completely obliterated the former Gibraltar horse racing track.

The airfield played a major part in Operation Torch, the British and American invasion of French North Africa; the French possessions in Algeria, Tunisia and Morocco during the war.

Following the major reorganization of the Allied air forces at the Casablanca Conference in January 1943, RAF Gibraltar became a major sub-command of the Mediterranean Air Command under Air Chief Marshal Sir Arthur Tedder in February 1943.

Anti-submarine warfare was a major priority of Gibraltar during Second World War and some of the aircraft stationed here were equipped with special detectors to locate German U-boats in the relatively shallow waters around Gibraltar. United States Navy Fleet Air Wing 15 based at Port Lyautey in French Morocco[4] coordinated its antisubmarine warfare operations with RAF Gibraltar and assigned a ZP-14 Squadron blimp pilot/liaison officer to Gibraltar.[5]

On 18 July 1944 the Commander of RAF Gibraltar, Air Vice-Marshal Alick Stevens, was introduced to the antisubmarine technology of a USN K-ship when ZP-14 Commander Emmett J. Sullivan took him for a short blimp ride. The Goodyear K-112 was the first K-ship to land in Europe earlier the same day.

On 4 July 1943, at the height of the Second World War, a B-24 Liberator II crashed into the sea 16 seconds after taking off from Gibraltar Airport at 23:07 hours, killing all 11 passengers and five of the six crew. Among the passengers was Lt Gen Władysław Sikorski, commander-in-chief of the Free Polish Army and Prime Minister of the Polish government in exile, who had been inspecting Polish forces in the Middle East. A British inquiry ruled the crash an accident, concluding that the plane's controls had jammed for an unknown reason. Inevitably, given Sikorski’s importance, several conspiracy theories arose and persist.

A memorial to General Sikorski and the victim of the crash stands beside the airport. 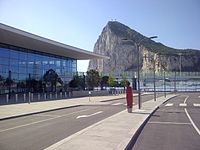 Spain has always disputed with the United Kingdom the status of the land on which the airport was built, asserting that it was not part of the land ceded in the Treaty of Utrecht, and this dispute has seriously affected the airport's operations. On 2 December 1987, an agreement was signed between the governments of the United Kingdom and Spain to allow the joint civil use of the airport.[6] The agreement foresaw the building of a new terminal in the neighbouring Spanish municipality of La Línea de la Concepción adjacent to the northern side of the existing frontier. However, the agreement was blocked by the Government of Gibraltar and as a result, the agreement was never implemented.

By late 2005 and early 2006, the implementation of a new agreement was one of the main topics of the Gibraltar Trilateral Forum being held between the Governments of Gibraltar, Spain and the United Kingdom. As a result, the Córdoba Accord was signed on 18 September 2006 by all parties. This ended all discriminatory restrictions on civilian flights to Gibraltar International, including the prohibition of flights over Spanish soil, and exclusion of Gibraltar from all EU agreements on air transport, allowing civilian flights from all nations into Gibraltar International.

On 17 November 2006 Iberia Airlines announced that it would start flights from Madrid to Gibraltar; this was a landmark move as no Spanish airline had flown to Gibraltar since 1979, because of the dispute. The first flight, on 16 December 2006, included some members of the Spanish Government on board. GB Airways flew a one-off flight in the other direction with a group of children from the Gibraltar area making up the passengers.

Between July and September 2009, Ándalus Líneas Aéreas operated services from both Madrid and Barcelona, and since those services ceased, Gibraltar has no direct air links to Spain.

On 10 January 2012, Gibraltar was selected as one of the 'World's Scariest Airport Landings and Take-offs' in the travel section of the Daily Telegraph due to its runway which extends into the sea.[8]

It was announced in January 2014 that an air route between Gibraltar and Marrakech would be established and launched in April.[9] The flight will be operated by Royal Air Maroc Express. 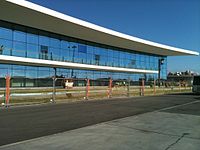 There is one terminal at Gibraltar International. Flight departures moved into the new terminal on 26 September 2012 when the old terminal was closed on 25 September 2012.[10]

The old terminal at the airport was built in 1959 and refurbished in the late 1990s.[11] For many years, it had been too small to cope with the number of passengers. The size of the terminal was 215,300 square feet, and had 10 check-in desks, one baggage carousel, one security gate and two departure gates. The departure gates then enabled passengers to board a bus which takes them to one of the new stands. On 26 November 2011, arriving flights switched to the new terminal as the first phase of the new terminal opened. On 25 September 2012, the old terminal closed its doors as flight departures moved into the new terminal on 26 September 2012. The last flight to use it was EasyJet flight EZY8904 to London-Gatwick. The old terminal building was demolished in February 2014 and will make way for a new coach park.

The terminal is 376,700 square feet, which is 161,459 square feet bigger than the old terminal. It has two baggage carousels and three departure gates, none of which are equipped with jet bridges. Only one of the two baggage carousels is in use for flights. It has a passenger capacity of up to 1.5 million passengers per year. Retail services are also available in the terminal. A new general aviation area has also been built inside the terminal to serve private aircraft.

The road across the runway is constraining operations at the airport, especially with the increase in operations since the Córdoba Agreement. Prior to this agreement, only three flights operated daily to Gatwick and Luton, and three flights a week to Manchester. On busy days, at present, some seven flights now arrive and depart. If the average time the road is closed for an aircraft to land or depart is ten minutes, then on certain days the road can be closed for over two hours.

Because of this, a new four-lane diversion road and tunnel section was planned. The new runway tunnel will reduce delays and tailbacks caused by aircraft taking off and landing. Construction of the new road was due to begin in January 2008 and be completed by the beginning of 2009,[2] however it is still not completed. The road across the runway will remain in place, for exceptional, specific or emergency use. But it will not be available for routine day-to-day, only for private vehicular traffic. Pedestrians will not be required to travel via the new road/tunnel, and will continue to cross the runway at the present location.

A new dual carriageway is also being built. It will pass under the new terminal and towards the eastern edge of the runway at which point it will pass through a tunnel under it and connect via a roundabout with Devils Tower Road on the opposite side of the runway. After the road tunnel on the north side of the runway the new road will run parallel to the frontier, passing under the air terminal fly-over section. The road will then branch into two, with one road leading to the loop and the frontier, and another leading to the Air Terminal, North Front and Winston Churchill Avenue.[2]

There will be several car parks built at Gibraltar International during its expansion. A new 220-space, three-storey car park located at the east of the new terminal. Another new car park will be built by Eastern Beach, and two multi-storey facilities will also be built on Devil's Tower Road.[2] The old terminal building will also be demolished to make way for a coach park. 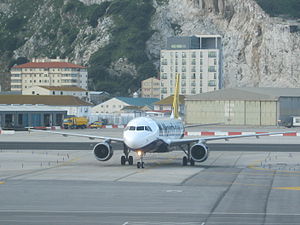 A Monarch Airbus A320 taxiing to the gate