The village of Gelli takes its name from a farm that was once found in the area, which translates from the Welsh language roughly as 'small wood or copse'. Before the industrialisation of the area there were few settlements in the area, mainly small agricultural and farm buildings. Archeological finds in the area have provided proof of earlier populations, mainly Bronze Age, though Gelli does house one of only two definite Romano-British finds in the Rhondda Valleys. Roman finds in the uplands of Glamorgan are scarce, but the settlement at Hen Dre'r Gelli, excavated in 1903, is the only undefended settlement of its type in the Rhondda. A lengthy archaeological report was published in 1906,[1] but little remains of the site, with much destroyed during the construction of the Nant y Gwyddon refuse tip.[2]

The farmlands of 19th century Gelli were owned by absentee landlords, like Crawshay Bailey and the Earl of Dunraven, who would gain from selling the areas when coal exploration began. The first pit sunk in Gelli was in the 1870s, undertaken by the firm owned by Edmund Thomas and George Griffiths. The Gelli Colliery was then purchased by brothers, John and Richard Cory who deepened the pit further. The colliery suffered a mining accident when a gas explosion in 1893 took the lives of five miners. Subsequently the pit was sold to the Powell Duffryn Company, who owned the mine until the nationalisation of the mining industry in 1947. A second pit was opened by David Davies in 1877, the Eastern Colliery, though this closed in 1937. 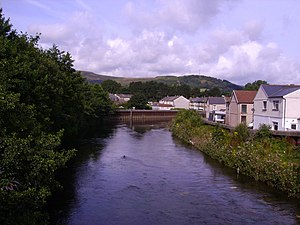 As with all villages in the Rhondda Valley, since the end of the coal mining industry, the area has suffered an economic depression with a history of unemployment higher than the national average. With little employment in the area apart from retail services many people commute to work outside the valley.

Gelli, which is adjoined by the communities of Ton Pentre and Ystrad, experiences fairly heavy levels of road traffic, with the B4223 – linking Llwynypia to Cwmparc – passing through the village. Gelli has also suffered in the past from flooding, owing to its low-lying level in relation to the River Rhondda, and after two serious floods in 1960 and 1970, the council responded by making improvements to the flood defences known as the Rhondda Wall.

Gelli was also home to a landfill site which has been at the centre of controversial reports connecting it with birth defects in children born in the nearby vicinity.[3] The reports resulted in a full scale environmental report,[4] and the decision by the local authorities to cease the dumping of domestic waste at the site.[5]