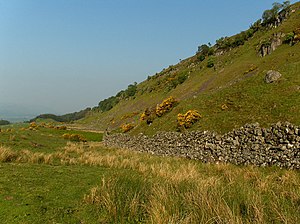 The northern escarpment of the Gargunnock Hills, south of Gargunnock

The Gargunnock Hills are a range of hills in Stirlingshire, found to the west of the City of Stirling. Their highest point is the summit of Carleatheran, whose 1,591-foot summit is crowned by a trig pillar.

The Gargunnock Hills are separated from the Fintry Hills to their west by the valley of the Backside Burn. To their east are the Touch Hills, whilst to the south is Carron Valley Reservoir.

The hills are composed of volcanic rocks formed in the Carboniferous period and which have proved more resistant to erosion than the surrounding sedimentary rocks.

The hills are defined to the north by a 1000-foot craggy escarpment overlooking the valley of the River Forth. At the foot of this scarp are the villages of Gargunnock and Kippen.

The hills drain principally to the south; Mary Glyn’s Burn and Burnfoot Burn combine with Gourlay’s Burn and Backside Burn to form Endrick Water. The waters of Earl’s Burn are dammed at two places to form Earlsburn Reservoir no. 1 and Earlsburn Reservoir no. 2. The few streams which fall to the north include Gargunnock Burn which plunges over the scarp at Downie's Loup.