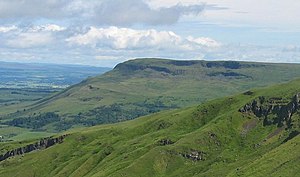 Stronend, at the western margin of the Fintry Hills

The Fintry Hills in Stirlingshire form the western end of a range of hills which stretch west from the City of Stirling. They culminate in the peak of Stronend, 1,677 feet above sea level, which overlooks the village of Fintry.

Like the neighbouring Gargunnock Hills they are composed of volcanic rocks, mainly lavas and tuffs erupted in the Carboniferous period.

The northern, western and southern sides of the hills are defined by a steep and craggy escarpment, whilst the eastern sides run more gently down into the valley of the Backside Burn and Endrick Water. The Boquhan Burn, which runs initially northeastwards, drops over the northern scarp at the Spout of Ballochleam. Loch Walton lies at the foot of the hills' southern slopes.