From Wikishire
(Redirected from Gainsborough, Lincolnshire)
Jump to: navigation, search

Gainsborough is a town in Lincolnshire, 15 miles as the crow flies north-west of the city and county town of Lincoln. Gainsborough stands on the banks of the River Trent and at one time it was an important port, with trade downstream to Kingston upon Hull, and was held to be the most inland port in Britain, sitting more than 55 miles&nbsp from the North Sea.

Bridge over the Trent

The town is at the meeting point of roads; the east-west A631 (which crosses the River Trent on Trent Bridge, the A156 (from the south to Torksey) and A159 (from Scunthorpe). Thorndike Way, Gainsborough's dual carriageway, intended to connect with the A15 at Caenby Corner, only extends eastward to the town boundary, and is named after the actress Dame Sybil Thorndike (born in the town in 1885).

The civil parish of the same name extends southwards across much rural land to Lea. The boundary passes to the south of Warren Wood, north of Lea Wood Farm, and passes along the northern edge of Lea Wood. Passing northwards through Bass Wood, it meets Corringham, the main village to the east of Gainsborough. The boundary crosses Thorndike Way (A631) and briefly follows the B1433. At Belt Farm it meets Thonock, then follows The Belt Road, to the south of Gainsborough Golf Club (also nearby are Thonock Park and Karston Lakes golf courses), then down Thonock Hill - the edge of the Trent Valley. 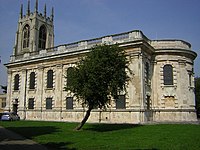 The first recorded evidence of a church at Gainsborough is in 1180, when the rectory there was granted by Roger de Talebu to the great Preceptory of the Knights Templar in Lindsey, at Willoughton. In 1547, after the Reformation, the parish of Gainsborough came under the jurisdiction of the Bishop of Lincoln for the first time.

All Saints' Church fell into disrepair after the Civil War, and in 1736 it was demolished to make way for a new church. The new Parish Church was completed in 1748 with a mix of perpendicular Gothic and Classical Revival styles and all that remains of the Mediæval church is the west tower, 90 feet high, and housing eight bells. A monument to Richard Rollett, master sailmaker on Captain James Cook's second voyage in 1824, is located in the porch.[1]

The town's increasing population in the 19th Century required the building of a second church in the south of the town, and Holy Trinity Church opened in 1843. This was followed by St John the Divine Church on Ashcroft Road in 1882, and St George's Church on Heapham Road in the 1950s. Holy Trinity closed in 1971 (and is now the Trinity Arts Centre), and St John the Divine closed in 2002.

Non-conformism flourished in Gainsborough. Some of the Mayflower Pilgrims]] worshipped in secret at the Old Hall before sailing for Holland in 1609. The John Robinson Memorial Church in Church Street was dedicated in 1897, named after John Robinson (1576 – 1625), the pastor of the "Pilgrim Fathers" before they left on the Mayflower and its cornerstone laid by the American Ambassador. It is now the town's United Reformed Church.

John Wesley, the founder of Methodism and a Lincolnshire man himself, preached in Gainsborough several times between 1759 and 1790. The town's first Methodist chapel opened in Church Lane in 1788, moving to a new site in North Street in 1804 (and rebuilt there as St Stephen's in 1966). The Primitive Methodists became established in the town in 1819, with chapels in Spring Gardens (1838), Trinity Street (1877) and Ropery Road (1910). 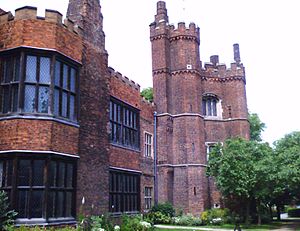 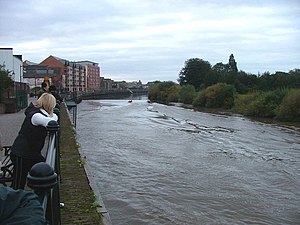 The Aegir on the Trent 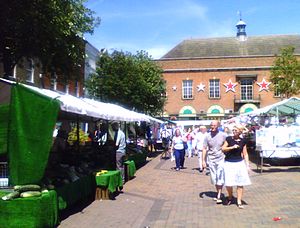 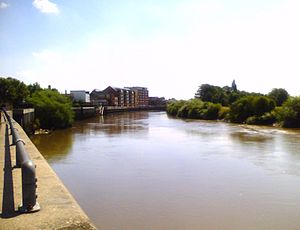 Sweyn Forkbeard and Canute the Great

Gainsborough was one of the capital cities of Mercia during the Anglo-Saxon period, until the Danes smashed he kingdom.

Historically, Gainsborough is the "capital that never was". Towards the end of July 1013, the Danish king Sweyn Forkbeard]], together with his son Canute, arrived in Gainsborough with an army of conquest. Sweyn defeated the English and King Ethelred fled the country. Sweyn was declared King of the English and he returned to Gainsborough.

Sweyn and Canute encamped at the Gainsborough Castle (on the site of the present day Old Hall), but Sweyn was killed five weeks later when he was thrown from his horse in Gainsborough. His son Canute established a base elsewhere from which he led his painful struggle for a kingdom briefly assured to his father.

The Domesday Book of 1086 records that Gainsborough was exclusively a community of farmers, villeins and sokemen, tenants of Geoffrey de Guerche. The population was only about 80 people, of which about 70% were of Scandinavian descent.

The Lindsey Survey of 1115-18 records that Gainsborough was then held by Nele d'Aubigny (known as Nigel the Black). He was the forebear of the Mowbray family, and the Mowbray interest in Gainsborough continued until at least the end of the 14th Century.

A weekly market was granted by King John in 1204.

Thomas Burgh acquired the manor of Gainsborough in 1455. He built Gainsborough Old Hall between 1460 and 1480, a large, 15th-century, timber-framed mediæval strong house, and one of the best-preserved manor houses in Britain. It has a magnificent Great Hall and strong brick tower. King Richard III in 1483 and King Henry VIII in 1541 both stayed at the Old Hall. The manor was sold to the Hickman family in 1596.

The town was garrisoned for the King in January 1643 and began co-operating with the garrison at Newark in raiding the surrounding countryside and harassing the Parliamentarians there. With the A1 road (Great Britain)|Great North Road blocked to Parliamentarian traffic, Gainsborough became significant as part of a route around Newark by way of Lincoln and the line of the modern A15 road. It was in the Royalists' interests to obstruct this, which gave rise to the battles of Gainsborough and Winceby. Parliament captured Gainsborough in the battle on 20 July but was immediately besieged by a large Royalist army and forced to surrender after three days.

Parliament captured Gainsborough again on 18 December 1643, but was forced to withdraw in March 1644, razing the town's defences to prevent their use by the enemy. The Earl of Manchester's army passed through Gainsborough in May 1644 on its way to York and the Battle of Marston Moor.

After the Civil War ended in 1645, several people in Gainsborough were fined for their Royalist sympathies, including Sir Willoughby Hickman at the Old Hall, who had been created the first Baron Gainsborough by Charles I in 1643.[2]

Gainsborough suffered its only large-scale air raid of the war on the night of 10 May 1941: high explosive bombs and incendiaries were dropped but many of them fell harmlessly on the surrounding countryside. There was only minor damage in the town, and no casualties.

On the night of 28–29 April 1942 a single Dornier 217 dropped a stick of bombs on the town centre, causing extensive damage and the loss of seven lives. In the early hours of 5 March 1945 a single Junkers 88 fighter/bomber made a low level attack over the town, dropping anti-personnel bombs on Church Street and the surrounding residential area. Three people lost their lives and 50 houses were damaged.[3]

On 31 December 1942, an RCAF Bristol Beaufighter aircraft on a training exercise crashed on Noel Street, killing both airmen and a three-year-old girl, and on 22 May 1944 an RAF Spitfire collided with a Wellington bomber and crashed into a Sheffield-bound goods train as it was passing over the railway bridge on Lea Road. The pilot was the only casualty.

There was a proposal to develop Gainsborough as a new town linked to Sheffield, but the plan was not pursued. New housing was instead built to the south east of Sheffield.[4]

In July 1958, BP discovered oil at Corringham, then at Gainsborough in January 1959.

George Eliot and The Mill on the Floss

Many scholars believe Gainsborough to be the basis for the fictional town of St Ogg's in George Eliot's The Mill on the Floss (1860). The novelist visited Gainsborough in 1859, staying in the house of a shipbuilder on Bridge Street (which survives today as the United Services Club). The stone bridge and the nearby willow tree are mentioned, and the Old Hall is described in detail. Thomas Miller's Our Old Town published two years before, included the true story of a miller who loses a lawsuit after assaulting his adversary, and George Eliot used a similar story plot in The Mill on the Floss as the basis of the Tuliver/Wakem feud. It is also possible that she witnessed the aegir (a tidal bore) on the Trent, which inspired the flood in her story's climax.

The house and grounds of Richmond Park, in the north of the town, was opened as a public park in 1947. Attractions include greenhouses, an aviary, and a 600 year old oak tree.

Whitton Gardens on the Riverside opened in 1973.

In 2000 renovation of the town's river banks was completed, providing residents and tourists with access to the riverside.

The second weekend in June sees the town play host to the Gainsborough Riverside Festival, an annual arts and heritage event which has run since 2001.