Fulmer is a village in southern Buckinghamshire. The village has along most of its northern border a narrow 'green buffer' from Gerrards Cross and is heavily wooded.

The village's name is derived from the Old English fugol mere, meaning "Bird Lake". It is recorded in manorial rolls in 1198 as Fugelmere.

In the late 17th century the owners of the manor of Fulmer were forced to sell their house to their servants because they had squandered their money and could not afford to pay them. The manor then passed into the hands of the Duke of Portland.

In the mid-19th century, watercress was grown at Moor Farm, known locally as "The Bog", (now Low Farm) by Richard Whiting Bradbery, the son of William Bradbery, the first British watercress pioneer who had a large cress farm at West Hyde in Hertfordshire. Richard is buried in St James churchyard, Fulmer, with his wife Hannah.

Many films have been shot in Fulmer, including Sleepy Hollow. 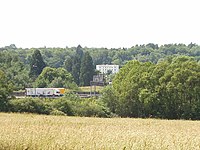 In July 2011 Fulmer Village was awarded first prize in the Gurney Cup for Buckinghamshire's best kept village (population under 500). It was also awarded the Sword of Swords for achieving the highest score of all villages that entered no matter of size or population. Some locals have commented that the recent renovation of the village's red K6 telephone kiosk by two local residents played a large part in the scoring due to the full marks awarded for this category.[1]

Fulmer Parish Council maintains a website with both historical and current information regarding the village, including recent news and upcoming activities in and around the area.