Fosbury is a tiny village in Wiltshire, on the eastern edge of the county, near the Hampshire border. It is to be found about eleven miles south-east of Marlborough and seven miles south of Hungerford, the latter in Berkshire.

An Iron Age hill fort known as Fosbury Camp lies on high ground south of the village, and this fort may give the village is name. Two estates at Fostesberie were recorded in Domesday Book of 1086, with altogether 14 households.[1] The smaller one was granted for a time to Shaftesbury Abbey and then to the priory at Noyon-sur-Andelle in France. In 1414 it was granted to the new priory at Sheen in Surrey.[2]

Fosbury lay within Savernake Forest until 1330.[3] A small mediæval village has disappeared; most of the present buildings are from the 19th century.[2]

Fosbury House, north-west of Fosbury, was built around 1800. From 1810 it was the seat of the Bevan banking family, and later was the home of bibliophile Alfred Henry Huth until his death in 1910.[2] 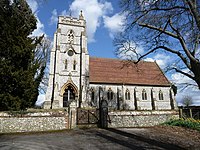 The old parish church, Christ Church, was built in 1854–56 by [[Samuel Sanders Teulon. It was declared redundant in 1979,[2] and is now in private ownership.

The building is a Grade II* listed building.[4] It is build of flint with stone dressings, and it has a three-stage tower with an octagonal stair turret. Pevsner writes that, apart from details of the chancel roof, there is "little otherwise of Teulon's obstinate originality".[5]

Teulon also designed the house for the perpetual curate, close to the church and known as Buchan House. In flint with brick decoration, and with stonework matching the church, it too was completed in 1856.[6]

The parish was united with Tidcombe in 1979 and the church was declared redundant: soon after, it was sold to the owner of Buchan House.[9]