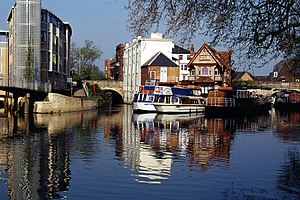 View of Folly Bridge and the island from downstream.

Folly Bridge is a stone bridge over the River Thames in Berkshire carrying the Abingdon Road, south from the centre of Oxford.[1] It was erected in 1825–27, to designs of a little-known architect, Ebenezer Perry (died 1850), who practised in London.[2]

The bridge is in two parts separated by an island. The origin of the name is uncertain[3] although it has been suggested that it originated about 1650 after a tenant of Bacon's study.[4] 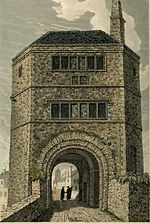 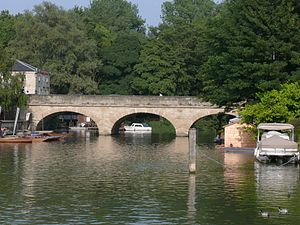 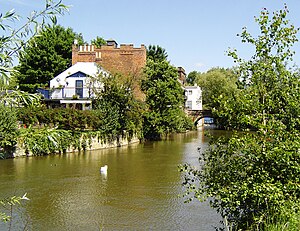 The island and "South Bridge" from upstream.

The bridge apparently stands at the site of the ford over which oxen could be driven across the Isis, the ancient name of the reach of the Thames between Folly Bridge and Iffley Lock. The first known stone bridge on the site was built by Robert D'Oyly in around 1085, but there was believed to be a wooden bridge in the time of Ethelred of Wessex.[4] Remains of the Saxon structure may still be seen beneath the present bridge.

Until the late 17th century the bridge was known as South Bridge, and formed part of a long causeway known as Grandpont, which stretched along most of the line of Abingdon Road.[5] In the 13th century, the alchemist Roger Bacon lived and worked at "Friar Bacon's Study" which stood across the north end of the bridge until 1779, when it was removed to widen the road. Samuel Pepys visited Bacon's study in 1669, noting: "So to Friar Bacon's study: I up and saw it, and gave the man 1s". In 1369, when there was a grant of pontage on "Grauntpount", the structure was said to be "so dangerous as to be well nigh impassable".

A toll-booth gateway tower used to straddle the approach to the bridge, which was on the Abingdon to Banbury turnpike. The former bridge and "Bacon's Tower" were drawn by many artists, including the twelve-year-old Joseph Mallord William Turner.[6]

There was also a weir underneath the bridge which had a flash lock and later a "pen" lock. At the beginning of the 19th century this and the poor state of the bridge itself constituted a problem to navigation. Surveys discovered that the foundations were in a very bad state and in 1815 an Act of Parliament was obtained to rebuild the bridge and remove the "Tackle and Works" underneath. The new bridge works were begun in 1824 and completed in 1827. A pound lock was established nearby in about 1832, which was removed in 1884. The bridge is Grade I listed. [7]

The toll house was rebuilt in 1844 and is now, along with the bridge, also Grade II listed; tolls on the bridge were abolished in 1850.[8] A scheme for a public footbridge next to the bridge was designed by Nicholas Grimshaw & Partners but was not built.[9] 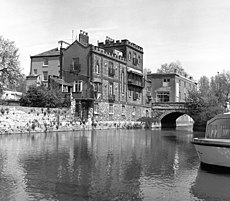 Castellated house at Folly Bridge (in 1979). The house was built in 1849 for the mathematician Joshua Cardwell.

Robert Gunther, the historian of science, bought 5 Folly Bridge, an unusual castellated house by the bridge, in 1911.[10] The house is embellished with statues and cast iron balconies on the outside. It is located on a small island in the middle of the Thames.

Alice's Adventures in Wonderland originated as a story told on a boating trip which began at Folly Bridge.[11]

A panoramic view from Folly Bridge, looking downstream on the River Thames towards the Oxford University College boat houses.