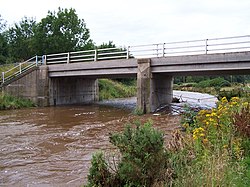 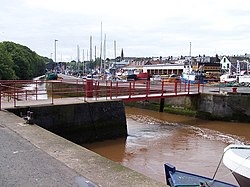 Eye Water is a river in Berwickshire, it flows in a generally south-easterly course from its source in the Lammermuir Hills to its estuary at Eyemouth, to which it gives a name. Its length is 22 miles.

The Eye Water rises on the eastern slopes of Wester Dod at height of 1,230 feet, it flows south-east for seven miles before swinging north-east for two miles to reach the village of Grantshouse.

The Eye Water flows on the southern outskirts of Grantshouse as it again turns south-east and runs in a valley between Horseley Hill and Dalks Law alongside the A1 road and the East Coast Main Line railway. The river keeps to the south-west side of the A1 passing through the villages of Reston and Ayton where it flows through a pleasant wooded valley on the Ayton Castle estate. The estate was planted with parkland trees when the present baronial style castle was built in 1851 and many of these remain around the river banks although part of the park has since been planted with mixed woodland.[1][2]

At Ayton the Eye Water swings north for the final three-mile leg to its estuary. It runs under the A1 road in a wooded gorge and then receives its largest tributary on its northern bank, the Ale Water which rises on Coldingham Moor seven miles to the north-west.

On 12 August 1948, Berwickshire was hit by a calamitous flood when one third of the annual rainfall fell in just six days. The water flowed off the Lammermuir Hills causing the Eye Water and other rivers of the area to overflow and cause much damage. The low lying farm land around Ayton was turned into a large lake with the 60-foot-high embankment of the East Coast Main Line railway acting as a dam. There were fears that the embankment would break and Eyemouth would be inundated. The embankment did hold but Eyemouth still received some damage, with reports saying that gales and the impact of the overflowing Eye Water had the "impact of a hurricane".